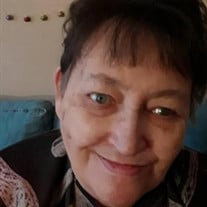 Lequita Richards, 72, of Hoopeston, IL passed away on Tuesday, March 16, 2021 at Carle Foundation Hospital in Urbana, IL. She was born October 8, 1948 in Henderson, KY, the daughter of Clinton and Geraldine (Edwards) Stone. Lequita married Donnie Lee Richards Sr. in September 1971. He preceded her in passing. Also preceding her in passing is her parents; and two brothers, Andy Stone of Rankin and Tim Stone of Hoopeston. She is survived by her children; Tabatha Kay Richards-Buss (Billy Buss) of Hoopeston, IL and Donnie “Buddha” Lee Richards Jr. (fiancé Rachel Stout) of Hoopeston, IL; sister, Debra (Howard) Wilmington of Texas; brothers, Roger (Lore) Stone of Cabery, IL and Ivory (Loraine) Stone of Kankakee, IL; special grandchildren, Isabella Sanchez, Allison Haris, Kenadie Wilson, and Cheyenne Wilson; and many nieces and nephews. Lequita worked at Howards for many years until working at Casey’s gas station in Milford, and then at the Milford High School with her husband doing custodial work. She enjoyed the Green Bay Packers and the Cubs. She liked to watch movies, any and all tv shows, playing computer games, and cooking. If she had free time she liked to go fishing. Public Graveside Services will take place on Thursday, March 25, 2021 at 12:30 P.M. at Rankin Union Cemetery in Rankin, IL. Pastor Gary Milton will officiate. Memorials in Mrs. Lequita Richards’s name can be made to Anderson Funeral to help with funeral expenses.

The family of Lequita Richards created this Life Tributes page to make it easy to share your memories.

Lequita Richards, 72, of Hoopeston, IL passed away on Tuesday,...

Send flowers to the Richards family.