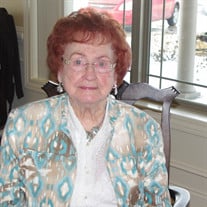 Leona Ruth Rice Gernand, 95, of Rossville, IL, passed away at her home at Autumn Fields Adult Community in Hoopeston, at 4:47 P.M. Sunday April 19, 2015. She was born on February 7, 1920, on a farm near Hedrick, IN, to Dale and Lillie (Artis) Shepherd. She married Martin W. Rice on October 27, 1940 in Rossville. He preceded her in death in 1971. She then married George M. Gernand in 1974 in Rossville. He preceded her in death in 1996. She is survived by two sons, Ray (Marsha) Rice and Dale (May) Rice both of Rossville, IL; a stepson, Mark (Vivian) Gernand of N.Y.; a step-daughter, Norah Berchtold of CA; four grandchildren, Martin (Niki) Rice of Hoopeston, IL, Amber Botkin of Danville, IL, Autumn (Jamison) Kuemmerle of Danville, IL and Kelli (Drew Stephen) Rice of Rossville, IL; four step-grandchildren, Michael and Michelle of Champaign, IL and Barbara and Steven of CA; six great -grandchildren, Rilynn, Arynn, Hayden, Noah, Slayton and Isla; two step-great-grandchildren, Cameron and Samantha; one brother-in-law, Jess Bennett of Rossville, IL, many nieces and nephews and her extended family, Don, Joyce, Jordan and Alexis Hasler of Rossville. She was preceded in death by her parents, a step-son, David, four brothers, Howard, Wayne, Doyle and Gerald; many brothers-in-law and sisters-in-law and special sisters-in-law, Rebecca Shepherd, Rhuey Bennett and Mary Rhae McBride and many friends. Ruth graduated from Rossville High School in 1939. She was a hard working homemaker and farm wife. She worked alongside her first husband at their business, Rice’s Turkey Farm of Rossville, for many years, providing quality turkeys for the holidays. Early in her life, she was an active member of the Rossville United Methodist Church, where she taught Sunday school. She would later become a very involved member of the Rossville First Presbyterian Church. Ruth was devoted to her family and adored spending time with them. She was known for her cooking and loved making Sunday dinners for her family. She would frequent Merita’s Family Restaurant in Rossville where she enjoyed talking to many people in the community. Ruth was an avid Illini basketball fan and would never miss a game. She had a large collection of angels that she displayed around her home. Ruth recently began living at Autumn Fields Adult Community in Hoopeston where she made many new friends and looked forward to the daily activities. Per her wishes, she will be cremated. A graveside service will be held at 11:00 A.M. Friday April 24, 2015 at the Rossville Cemetery in Rossville, IL, with Rev. C. Scott Davis officiating. Burial will follow. In lieu of flowers, memorials may be made to the Rossville First Presbyterian Church 126 S. Chicago St. Rossville, IL 60963.

The family of Leona Ruth Gernand created this Life Tributes page to make it easy to share your memories.

Leona Ruth Rice Gernand, 95, of Rossville, IL, passed away at...

Send flowers to the Gernand family.