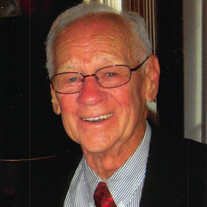 Leo C. Huffman, 91, of Hoopeston, IL, passed away at his home on Friday, April 28, 2017. He was born on December 18, 1925, to Arley and Lillian (Reinke) Huffman in Danville, IL. He married his wife Betty (Starr) of 66 years on December 23, 1950. She survives as well as a sister Betty Kilgore of Danville. He was preceded in death by his parents and four brothers, Dale, Ray, Ralph, and Richard. Also surviving are his four children, Rebecca Timmons of Hoopeston, IL, Kevin (Allan Duncan) of Maplewood, NJ, Amy (Richard) Hirschland of Alpharetta, GA, and Julie (Doug) Harper of Washington, IL; 11 grandchildren, Jeny (Doug) Frederick, Chris (Caroline Iafigliola) Timmons, Madeline and Isabel Duncan-Huffman, Jeremy, Ben, Matthew and Jonathan Hirschland, Megan (Bryson) Vanderheydt, and Joe and Jacob Harper; 6 great-grandchildren, Peyton, Paige, and Piper Timmons, Grace and Evan Frederick, and Carter Vanderheydt and several nieces and nephews. Leo was a graduate of Catlin High School in 1944 and upon graduation served two and a half years in the United States Army Air Corps. After being honorably discharged, Leo attended Bradley University in Peoria, IL and graduated with an education degree in 1950. Upon graduation, Leo began his 35 years in education with the Hoopeston School District as a teacher and basketball coach at Honeywell Grade School in Hoopeston, IL. He went on to receive his Masters and Advanced Education Certificate in Education from the University of Illinois and became Principal of Lincoln Grade School and John Greer Junior High in Hoopeston. In 1965, Leo became Superintendent of Hoopeston schools and served 20 years in this capacity until his retirement in 1985. He was a sixty-year member of the First Presbyterian Church in Hoopeston, serving nine terms as elder. He delivered “Meals on Wheels” for many years. He was a past member of the Hoopeston Rotary Club where he had served as President and was honored as Paul Harris Fellow. After a few years into retirement, Leo took up golf and played many years in the Ben Gay Golf League at Hubbard Trail Country Club. A memorial service to celebrate Leo’s life will be held at 12:00 P.M. (Noon) on Saturday, May 13, 2017 at the First Presbyterian Church 915 E. Orange St. Hoopeston, IL, with Rev. Wade Meranda officiating. His family would appreciate memorials be made to the First Presbyterian Church 915 E. Orange St. Hoopeston, IL 60942.

The family of Leo C. Huffman created this Life Tributes page to make it easy to share your memories.

Send flowers to the Huffman family.