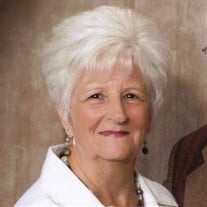 Leatha Carolyn (Hughes) Barragree, 75, of Rossville, IL, passed away at 8:53 p.m. Sunday October 11, 2015 at the Carle Foundation Hospital in Urbana, IL. She was born January 4, 1940, in Rossville, IL, the daughter of Clarence and Leatha (Hardy) Hughes. She married Dennis Barragree on September 6, 1959 at the United Methodist Church in Rossville, IL. He survives in Rossville. She is survived by two daughters, Melissa (Dan) Mikel of Rossville, IL and Kerry (Matt) Ludwig of Bloomington, IL; three sons, Brian Barragree of Absarokee, MT, Scott (Kathy) Barragree of Colorado Springs, CO and Brian Whitney of Danville, IL; one sister, Rita Clarke of Bismarck, IL; fourteen grandchildren; five great-grandchildren; two nieces, Julie Edwards and Lisa (Lynndel) Davan and two nephews, Jay (Jo) Satterwhite and Roger (Kim) Satterwhite. She was preceded in death by her parents and one brother, Richard Hughes. Carolyn was a member of the Rock Church in Danville, IL. She traveled to Kenya, Africa to King’s Kids’ Village for a mission trip. She worked as Ross Township Supervisor. Carolyn was a woman of faith, whose love and compassion for sharing God’s love affected so many. Her grace and wisdom will be missed. Her legacy will be the souls changed by her life. Carolyn is safe in the arms of Christ. A visitation will be held 10:00 A.M. – 12:00 P.M. Friday October 16, 2015 at Morning Star Church 201 N. Church St Rossville. The funeral service will follow the visitation at 12:00 P.M. Friday October 16, 2015 at the church, with Rev. Gary Ingold officiating. Burial will be at Mann’s Chapel in Rossville. Memorials may be made to the donor’s choice.

Leatha Carolyn (Hughes) Barragree, 75, of Rossville, IL, passed away at 8:53 p.m. Sunday October 11, 2015 at the Carle Foundation Hospital in Urbana, IL. She was born January 4, 1940, in Rossville, IL, the daughter of Clarence and Leatha (Hardy)... View Obituary & Service Information

The family of Leatha Carolyn Barragree created this Life Tributes page to make it easy to share your memories.

Send flowers to the Barragree family.