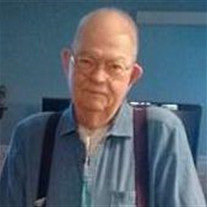 Larry Earl Tyler, 74, of Rankin, IL, passed away at 12:47 A.M. Friday February 27, 2015 at his home in Rankin, IL. He was born August 24, 1940 in Paxton, IL, the son of Earl and Sylvia (Sinn) Tyler. He married Martha Gill in 1959 in Hoopeston, IL. Together they had 3 children, Cynthia, Connie and Tim. Martha preceded him in death in 1975. He later married Marilyn (Schieler) McGuire in 1976 in Rankin, IL. She survives in Rankin, IL. He is also survived by his two daughters, Cynthia (Garry) Brown of Alvin, IL and Connie (Greg) Davis of Tuscola, IL; his son Tim Tyler of Paxton, IL; one brother, Scott Tyler of Hoopeston, IL; one sister-in-law, Brenda Tyler of Danville, IL; 7 grandchildren; 4 great-grandchildren and 15 nieces and nephews. He was preceded in death by his parents; one sister, Joyce Garrison; two brothers, Randall and Calvin Tyler and two granddaughters, Lindsey Dale and Elaina Tyler. Larry was a meat cutter for many years. He began working at the Grab-It-Here in Hoopeston. He then worked at Bloyd’s, Hoopeston IGA and Paxton IGA. He later worked at Kmart in Champaign until his retirement in 2002. After his retirement, Larry helped haul grain during harvest for the Anderson family farm. Larry was a member of the United Methodist Church in Rankin, where he served as a trustee. He also went on several church mission trips to Oklahoma, Texas, Louisiana and Mississippi after hurricane Katrina. He was also a member of the Masonic Lodge for 50 years. Larry enjoyed fishing, golfing and woodworking. He also enjoyed drinking coffee with his friends at McDonald’s. A visitation will be held 4:00 – 8:00 P.M. Tuesday March 3, 2015 at Anderson Funeral Home 427 E. Main St. Hoopeston, IL. Masonic rites will be held at 7:30 P.M. The funeral service will be at 11:00 A.M. Wednesday March 4, 2015 at Anderson Funeral Home, with Pastor Janet Longtin officiating. Burial will follow in the Rankin Union Cemetery in Rankin, IL. Memorials may be made to the Hoopeston Masonic Lodge 208 W. Orange St. Hoopeston, IL 60942.

The family of Larry Earl Tyler created this Life Tributes page to make it easy to share your memories.

Send flowers to the Tyler family.