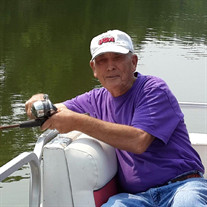 Larry Dale “L.D” Shipman, 78, of Hoopeston, IL, passed away at 11:07 P.M. Wednesday April 20, 2016 at Carle Hoopeston Regional Health Center. He was born on April 18, 1938, in Essex, Missouri, the son of Henry and Dora (Pry) Shipman. He married Lillie Mae O’Neal on December 24, 1955 in Grayridge, Missouri. She preceded him in death. He is survived by one daughter, Sherry (Larry) Shipman of Hoopeston; three sons, Stephen (Mardenna) Shipman of Hoopeston, Gregory (Lori) Shipman of Hoopeston, and Larry (Teresa) Shipman of Jamestown, IN; two sisters, Darlene Mayberry and Louise Adkinson; 9 grandchildren; 16 great-grandchildren and several nieces and nephews. He was preceded in death by his parents; two sisters, Verlene and Erlene; four brothers, Charles, Hershel, Elmer, and Henry, and one granddaughter, Taylor Shipman. Larry was a shipping foreman for Joan of Arc Canning Co. for 29 years and later worked at F.M.C before his retirement. He was a member of the Hoopeston Community Church of the Nazarene. He enjoyed camping, fishing and traveling. Larry loved his family, and especially enjoyed spending time with his grandchildren and great-grandchildren. A visitation will be held 4:00 - 8:00 p.m. on Monday April 25, 2016 at Anderson Funeral Home, 427 E. Main Street, Hoopeston, Illinois. The funeral service will be held at 11:00 a.m. on Tuesday April 26, 2016 at the Hoopeston Community Church of the Nazarene, 402 E. Honeywell Ave., with Pastor Jeff Alexander and Pastor Lloyd Simpson officiating. Burial will be at Floral Hill Cemetery in Hoopeston. Memorials may be made to the Hoopeston Community Church of the Nazarene 402 E. Honeywell Ave. Hoopeston, IL 60942.

The family of Larry Dale "L.D." Shipman created this Life Tributes page to make it easy to share your memories.

Send flowers to the Shipman family.