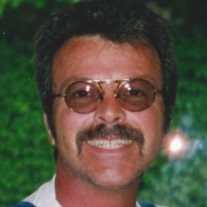 On Monday, February 17, 2014 at 3: 58 A.M., Larry D. Roberts, 60, of Fithian, IL, passed away at his home after a battle with brain cancer, exactly four years after his mother’s passing. Larry was born May 6, 1953 to James and Frances (Hardwick) Roberts in Lafayette, IN. He graduated from South Newton High School in Kentland, IN. He married Ronna Puzey on April 13, 1996 in Danville, IL. She survives in Fithian. Also surviving are his children, David Roberts of Mahomet, IL and Jessica (Wade) Covington of Dixon, MO; step-children, Kim (Greg Baker) Anderson of Oakwood, IL, Heather (Jason) Smith of Kankakee, IL and Daniel (Stephanie Reffit) Morris of Danville, IL; grandchildren, Brianna Covington, Justin, Caleb and Joel Roberts, step-grandchildren Brylie and Kade Anderson, Gage and Abby Smith and James Morris, who shared Larry’s love and interest of music and great-granddaughter Brynlie Todd. Larry is also survived by his sisters, Marcia (Bob) Gill of Oakwood, IL and Susan (Bart Carter) Pickrell of Malabar, FL and two nephews, Michael (Danielle) Gill and Ryan Gill both of Oakwood. He will be missed by many friends and was fortunate to have a special friend in Tim (Vicki) Crom. Larry was preceded in death by his parents; one brother, Randy and an infant sister, Karen. Larry worked in the concrete industry for 38 years. He spent 28 years at Builders Supply as a driver and 9 years at Blager Concrete as a dispatcher. He also served on the Village Board in Fithian. Larry loved music and was in many bands that played at Champaign area establishments over 25 years. Not only was he a talented guitar player and all around musician, but he was also a songwriter with a beautiful voice. Larry had a love of vintage cars and owned a few of his own over the years. Per his wishes, he will be cremated and a visitation will be held 5:00 – 8:00 P.M. Thursday February 20, 2014 at Anderson Funeral Home 427 E. Main St. Hoopeston, IL. A stone will be placed for him beside his family at Floral Hill Cemetery in Hoopeston. Memorial donations may be made in Larry’s name to the Hospice Hearts Sanctuary P.O. Box 181 Penfield, IL 61862.

The family of Larry David Roberts created this Life Tributes page to make it easy to share your memories.

Send flowers to the Roberts family.