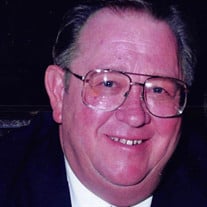 Larry Duane Oyler, 84, of Hoopeston, IL passed away on Wednesday, June 5, 2019 in Kerrville, Texas. He was born June 4, 1935 in Hoopeston, the son of Margaret and Clair Oyler. He married Carol Metz on June 16, 1956 at the Hoopeston United Methodist Church. He is preceded in death by his wife and parents. He is survived by two daughters, Jane C. (David) Guthrie of Comfort, TX and Cindy J. Oyler of Austin, TX; one son, Tim Oyler of Indianapolis, IN; four grandchildren, Andy Pulido of Austin, TX, Elizabeth (Brian) Ellis of Austin, TX, Emily Pulido of Austin, TX and Leah Hollingsworth of Comfort, TX; and one great-granddaughter, Emma Grace Ellis, Austin, TX. Larry attended Honeywell Grade School and John Greer High School in Hoopeston. He studied at Southern Illinois University and graduated from the School of Banking at University of Wisconsin. He was employed for 21 years at The City National Bank of Hoopeston, starting as a bookkeeper and ending as Executive Vice President. Larry completed his banking career as Executive Vice President and director at the Community Bank of Hoopeston. Larry was very involved in civic and community activities. He was an alderman of Hoopeston, president of the Hoopeston Jaycees, president of the Chamber of Commerce, treasurer during construction of the Hoopeston Community Memorial Hospital, chairperson of the National Sweetcorn Festival, and vice president of the Illinois Jaycees. Larry is a past member of Hoopeston Rotary Club, Watseka Elks Club, Hoopeston Lions Club, Hubbard Trail Country Club, JCI senator, and Hoopeston Historical Society. Larry is a life member of the Loyal Order of Moose and a member of Hoopeston American Legion (SAL). He is a member of the Hoopeston Christian Church Disciples of Christ. Larry received the local, the State of Illinois and the National Jaycee of the Year Award. He received the local Distinguished Service Award. He was an avid Illini fan and enjoyed travelling to south Texas during the winter months. Visitation will be held from 11:00 -1:00 p.m. Saturday, June 15, 2019 at Anderson Funeral Home, 427 East Main Street, Hoopeston, IL. A memorial service will follow the visitation at 1:00 p.m. at the funeral home with Rev. Thomas Cici officiating. A private burial will be held. In lieu of flowers, donations may be made to the Hoopeston American Legion or the charity of choice.

Larry Duane Oyler, 84, of Hoopeston, IL passed away on Wednesday, June 5, 2019 in Kerrville, Texas. He was born June 4, 1935 in Hoopeston, the son of Margaret and Clair Oyler. He married Carol Metz on June 16, 1956 at the Hoopeston United Methodist... View Obituary & Service Information

The family of Larry Oyler created this Life Tributes page to make it easy to share your memories.

Larry Duane Oyler, 84, of Hoopeston, IL passed away on Wednesday,...

Send flowers to the Oyler family.