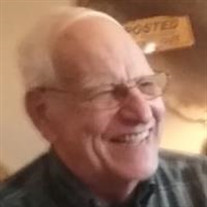 Larry Allen Fox, 75, of Rossville, IL., passed away at 1:39 P.M. Thursday November 9, 2017 at his home. He was born April 21, 1942, the son of Corbit and Ethel (Snyder) Fox. He married Lorettia Pruitt on June 3, 1960 in Stateline, IN. She preceded him in death. He is survived by two daughters, Eilena (Dean) Athans of Lake Geneva, WI, and Theresa Fox of The Colony, TX; one son Tim (Shirley) Fox of Fountaintown, IN; one sister, Debbie (Bobby)Key of Indianola, IL; four brothers, Elmer Fox of Indianola, IL, Mervin (Norma) Fox of Charlotte, NC, Dave (Luetta) Fox of Centerton, AR, and Carl (Rosemary) Fox of Bismarck, IL; four grandchildren, Leah Lopez, Matthew and Annaliese Fox, and Jimmy Athans; four great grandchildren, Amya, Giovanni, Malena and Juanita Lopez, and many nieces and nephews. He was preceded in death by his parents, a brother, Cecil Fox, a sister – in – law, Donna Fox, and a nephew Brian Fox. Larry built and was part owner of Country Cabinets until he sold his share. He retired from Elliott Lumber Company in Danville. He was a committee member at Camp Assurance in Georgetown, IL, and a member of First Baptist Church in Hoopeston, IL. He enjoyed spending his time with his family and neighbors, especially his kids and grandkids. A visitation will be held 1:00 P.M. – 2:00 P.M. CST Monday, November 13, 2017 at Anderson Funeral Home 427 E. Main St. Hoopeston, IL. The funeral service will follow the visitation at 2:00 P.M. at the funeral Home with Pastor Adam Taubert officiating. Burial will follow at the Rossville Cemetery in Rossville, IL. Memorials may be made to First Baptist Church 323 E. Seminary Hoopeston, IL 60942 or to Camp Assurance 8364 N. 2100 East Rd. Georgetown, IL 61846.

The family of Larry Fox created this Life Tributes page to make it easy to share your memories.

Send flowers to the Fox family.