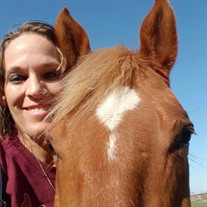 Kristi Kay DeWitt, 49, of Hoopeston, IL, passed away at 4:35 P.M. on Wednesday, April 22, 2020. She was born May 11, 1970, the daughter of John and Eileen (Guiliani) Golcynski. She married James L. DeWitt on January 20, 1995. He survives in Hoopeston, IL. She is also survived by her mother, Eileen Golcynski of Tilton, IL; two daughters, ShiAnna DeWitt of Danville, IL and Kira DeWitt of Hoopeston, IL; one son, Dakota (Kelly) Okler of Olympia, WA; one sister, Kimberly Golcynski of St. Louis, MO; two brothers, Korey (Amalia) Golcynski of Phoenix, AZ and Joseph Golcynski of Cameron, NC; one granddaughter, Gia Marie Douglass; many nieces and nephews; and special friends, Bobbi Drotos, who was like a sister, of Godfrey, IL, Tim Roberts, MD of Champaign, IL, and Rick (Diane) Salyers of Staffordsville, KY. She was preceded in death by her father, John Golcynski; father-in-law, Paul DeWitt; maternal grandparents, David (Anna Mae) Guiliani; and fraternal grandparents, Joseph F. (Flossie) Golcynski. Kristi was a Corrections Officer for Clinton County and later Vermilion County. She then served as a Police Officer for the village of Rossville. She went on to work as a R&B Medicaid Service Specialist until 2012 when she became a Homemaker. She attended Prairie Green Church of Christ. Kristi enjoyed horseback riding, barrel racing, and most of all spending time with her family and raising her children. As per her wishes Cremation Rites have been accorded and no service will be held. Memorials may be made to Prairie Green Church of Christ. Please visit www.anderson-funeral-home.com to view Kristi’s eternal tribute page and to send the family condolences. Anderson Funeral Home in Hoopeston is handling the arrangements.

The family of Kristi Kay DeWitt created this Life Tributes page to make it easy to share your memories.

Send flowers to the DeWitt family.