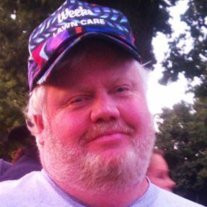 Kerry O. Weeks, 55, of Thomasboro, IL, passed away at 8:07 A.M. Monday January 6, 2014 in Champaign, IL. He was born October 4, 1958, in Urbana, IL, the son of Kenneth and Dorothy (Rewarts) Weeks. He graduated from Urbana High School in Urbana, IL. Kerry married the love of his life Debbie Mikesell on October 13, 1990, at the Trinity Lutheran Church in Urbana, IL. She survives in Thomasboro, IL. He is survived by two daughters, Brittany Weeks and future son-in-law Trey Broeker of Thomasboro, IL and Tiffany Huffman of Allentown, PA; one son, Todd Huffman of Rantoul, IL; one sister, Deb (Cliff) Naber of Franklin, TN; one brother, Kent Weeks and Bobbi Pittman of Champaign, IL; two granddaughters, Ava Hernandez of Rantoul, IL and Tori Huffman of Allentown, PA and two nephews, Jeremy and Jason Naber. He was preceded in death by his grandparents and parents. Kerry was the owner and operator of Weeks Lawn Care and he also worked for his brother at CU Maintenance helping sweep parking lots around the area. He was a member of the Busey Fletcher Stillwell VFW Post #630 in Urbana and the Champaign County Fair Board. Kerry had many hobbies which included going to auctions, Nascar races and the 4-wheel drive Jamboree with friends. He also enjoyed watching his favorite television shows, with his remote in hand and was always there to lend a helping hand to anyone that needed it. Kerry enjoyed life and spending time with his family and friends. Memorials may be made to the Busey Fletcher Stillwell VFW Post #630 1303 E. Main St. Urbana, IL 61802.

The family of Kerry O. Weeks created this Life Tributes page to make it easy to share your memories.

Send flowers to the Weeks family.