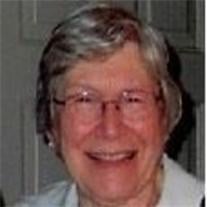 Kathleen Marie Agusti, 93, of Champaign, IL, formerly of Danville, IL and Potomac, IL, passed away on Sunday, May 26 at 11:45 p.m. at Champaign Urbana Nursing and Rehabilitation Center in Savoy, IL. Kathleen was born on May 11, 1920, in Delaware County, Pennsylvania, daughter of Thomas and Sarah Regan Cosden. She married Dr. Manuel Agusti on August 24, 1946. He preceded her in death on October 5, 1990. Survivors include her three sons, Jose Agusti (Lisa Burgoon) of Savoy, Manuel Agusti (Susan) of Danville, Daniel Agusti of Chicago, her two grandsons, Josh Agusti of Oak Park, Adam Agusti of Dana, Indiana, and her niece, Kathleen "Pinky" Coupe (Butch), of Dover, Delaware, named after her "Aunt Kay" to whom she was as close as a daughter and regarded as such. She was particularly close to her cousins, Eileen and Tony Melia of Oakville, Ontario, Canada. She was also preceded in death by her parents, her brother, Joe Cosden and her sister, Gladys Bluzzard. Kathleen was a registered nurse having graduated from St. Francis School of Nursing, Wilmington, Delaware, in 1945. She later worked as a registered nurse at St. Francis Hospital, Wilmington, Delaware where she met her husband, and Our Lady of Lourdes Memorial Hospital, Binghamton, New York before moving with her husband to Vermilion County, Illinois were he practiced medicine for thirty-five years. Kathleen continued nursing in support of her husband until she put her career aside to raise her family. But Kathleen never really gave up nursing; she continued to be a healer her entire life seeing it as her life's work. She was a member of St. Paul Catholic Church, Danville. She was also a member of the Vermilion County Medical Auxiliary, the Illinois State Medical Society Auxiliary, and the Vermilion County Garden Club. From the time she was eight years old Kathleen sewed. She was an excellent seamstress making nearly all her clothes until much later in her life when her eyesight became too poor to continue. She believed that store-bought clothing was never as good as the clothing she made for herself and others. She felt that everyone she was close to (and many she may have known a short time) needed one of her coats that she designed and meticulously made by hand. It was her sense of generosity that no one should be cold and without one of her beautiful coats. Everyone who knew Kathleen will remember her for her energetic, exuberant personality and greeting everyone as if they were long-lost family. Many were astounded as she spoke fluent Spanish which she learned almost immediately simply by hearing her husband speak his first language with family while in Cuba. She never engaged in an argument or fight with anyone always taking the high road with any encounter. She was endlessly supportive of her husband, sons, "daughter" and grandsons. She would sacrifice her own comfort to insure the comfort of others. Kathleen gave to everyone selflessly. She loved the many dogs she had in her life, often saying "I never met a dog I didn't like." Kathleen was immensely proud of her Irish heritage. It was one of the greatest thrills of her life when she was able to travel to Ireland in 1980 to meet relatives she had only heard about from her own mother, Sarah, who had landed at Ellis Island from Ireland in 1917.

Kathleen Marie Agusti, 93, of Champaign, IL, formerly of Danville, IL and Potomac, IL, passed away on Sunday, May 26 at 11:45 p.m. at Champaign Urbana Nursing and Rehabilitation Center in Savoy, IL. Kathleen was born on May 11, 1920, in Delaware... View Obituary & Service Information

The family of Kathleen Agusti created this Life Tributes page to make it easy to share your memories.

Send flowers to the Agusti family.