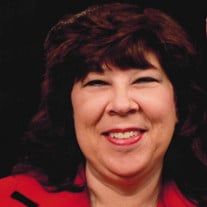 Karen Christine Bushue, 57, of Rankin, IL, passed away at 8:18 A.M. Sunday May 29, 2022, at her home. She was born September 7, 1964, at the US Army Base in Neubrucke, Germany, the daughter of Glynn A. and Carolyn (Heimlich) Wolfe. Her mother, Carolyn, survives in Cissna Park, IL. She married Gregg Bushue on March 26, 2011, at the Trinity Lutheran Church in Cissna Park, IL. He survives in Rankin, IL. She is also survived by two sons, Shawn and Matthew Byrnes of Champaign, IL; two brothers, Steve (Sherry) Wolfe and Dave (Judy) Wolfe; mother-in-law, Arlene Bushue; and several nieces and nephews, whom she enjoyed. She was preceded in death by her father, Glynn Wolfe; her grandparents; and her father-in-law, Harold Bushue. Karen began her teaching career in Sheldon. She then taught at Honeywell School in Hoopeston and most recently at Maple School. She was a member of the Trinity Lutheran Church in Cissna Park. Karen served as the former Rankin Village Clerk and was a former member of the Rankin Lions Club. She was an Illini basketball fan and enjoyed playing the piano, camping, and working in her flowers. Karen also enjoyed spending time with her family. A visitation will be held 4:00 – 7:00 P.M. Thursday June 2, 2022, at Anderson Funeral Home 427 E. Main St. Hoopeston, IL. The funeral service will be held at 11:00 A.M. Friday June 3, 2022, at the Trinity Lutheran Church, 302 S. 4th St. Cissna Park, IL, with Pastor Michael Ruhlig officiating. A one-hour visitation will be held prior to the funeral service on Friday from 10:00 – 11:00 A.M. at the church. Burial will follow in Rankin Union Cemetery in Rankin, IL. Memorials may be made to the Hoopeston Maple R.T.I. (Response to Intervention) Reading and Math Intervention, 500 S. 4th St. Hoopeston, IL 60942.

The family of Karen Christine Bushue created this Life Tributes page to make it easy to share your memories.

Send flowers to the Bushue family.