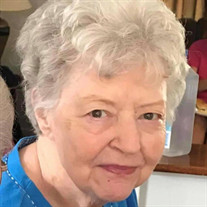 June (Betty) Carter, 84, of Hoopeston, IL, passed away at 10:20 A.M. Thursday April 1, 2021 at Heritage Health Therapy and Senior Living in Hoopeston. She was born December 14, 1936 in Hoopeston, the daughter of Paul and Mildred (Smith) Carder. She married Web (Wilbur) Carter on August 15, 1953 in Hoopeston. He survives in Hoopeston. She is also survived by two daughters, Jo Ellen (Ronald) Rife of Bedford, IN and Vickie E. (Jimmy) Means of Hoopeston, IL; one son, Wilbur Lynn Carter of Hoopeston, IL; one sister, Nancy J. (Bill) Taylor of Columbia, IL; one brother, Paul Alan (Valorie) Carder of Lincoln, IL; four grandchildren, Christopher Rife, Amanda Rife, Denelle Carter, and Mitchell Means; great-grandchildren, Kylie (Rife) Sabillón, Alexis Sims, Jayda Rife-Smith, Colton Rife, Paige Rife, Addyson, Dailey, and Gracelyn Means, Novic Rhodes, and Sydney and Olivia Sims; and several nieces and nephews. She was preceded in death by her parents; one sister, Phyllis Estock; one great-grandson, Austin “AJ” Rhodes III; one niece, Billie Jean Taylor; and one nephew, Mark Estock. June was a factory worker for most of her life. She worked at Scranton’s which later became CBS and then at TRW in Hoopeston. She then worked at Sorensons in Paxton. June later worked at Country Terrace Assisted Living in Hoopeston before retiring. She was a member of the First Church of God in Hoopeston, where she also belonged to the women’s group. She was also a member of the Hoopeston Hospital Auxiliary. June enjoyed cooking, reading, and spending time with her family and friends. A visitation will be held 10:00 – 11:00 A.M. Wednesday April 7, 2021 at Anderson Funeral Home 427 E. Main St. Hoopeston, IL. The funeral service will follow the visitation and will begin at 11:00 A.M. Wednesday at the funeral home with Pastor Tim Carter officiating. Burial will follow in Floral Hill Cemetery in Hoopeston. Memorials may be made to the Women of the First Church of God 1004 E. Orange St. Hoopeston, IL 60942.

June (Betty) Carter, 84, of Hoopeston, IL, passed away at 10:20 A.M. Thursday April 1, 2021 at Heritage Health Therapy and Senior Living in Hoopeston. She was born December 14, 1936 in Hoopeston, the daughter of Paul and Mildred (Smith) Carder.... View Obituary & Service Information

The family of June (Betty) Carter created this Life Tributes page to make it easy to share your memories.