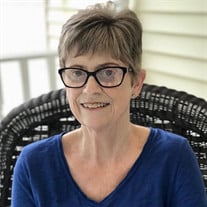 Judith Anne Green, 77, of Rossville, IL, passed away at 9:38 A.M. Monday August 10, 2020 at her home in Rossville, IL. She was born January 2, 1943 in Bloomington, IL, the daughter of Ralph C. and Pauline (Taylor) Morgan. She married Duane Hoose and together they had two sons. She later married Mike “Greenie” Green on December 26, 1999 at New Bethel Church in Rossville. He survives in Rossville. She is also survived by her two sons, Mark (Joanna) Hoose of Mountain View, CA and Matthew (Amy) Hoose of Danville, IL; four sisters, Carolyn Sue Johnson of Normal, IL, Joyce Changnon of Mahomet, IL, Paulette (Jack) Mara of Falmouth, MA, and Pamm (Rich) Mihm of Champaign, IL; two brothers, Ralph (Carol) Morgan of Normal, IL and Rick (Lisa) Morgan of Champaign, IL; three sisters-in-law, Maralee Morgan of Normal, IL, Sheryl Morgan of Bloomington, and Jan (Scott) Preston of Hoopeston, IL; one granddaughter, Nora Justine Hoose; numerous nieces and nephews; and her extended family, Robert and Erin Danner and her “adopted” grandchildren, Macy and Alex Danner. She was preceded in death by her parents; three brothers, John, Stanton, and David Morgan; one sister-in-law, Mary Morgan; and two brothers-in-law, Eldon Johnson, and Stan Changnon. Judy worked at the Bank of Rossville which later became the Bank of Rantoul Rossville Branch until her retirement. She was a member of the Rossville United Methodist. She enjoyed reading and loved to go shopping especially with her sisters and her beloved granddaughter, Nora. Judy also loved spending time with Matt and Amy, visiting Mark, Joanna, and Nora in California, and sharing her life with Mike. Judy’s family would like to give a special thanks to the Carle Hospice North team for their care and compassion. A visitation will be held 11:00 A.M. – 1:00 P.M. Monday August 17, 2020 at Anderson Funeral Home 427 E. Main St. Hoopeston, IL. A private family funeral service will be held, and burial will be in Mann’s Chapel Cemetery. Memorials may be made to the American Cancer Society 4234 N Knoxville Ste B, Peoria, IL 61614.

The family of Judith Anne Green created this Life Tributes page to make it easy to share your memories.

Send flowers to the Green family.