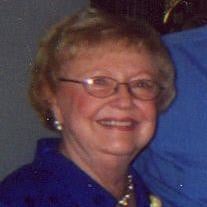 Joyce Darlene Hedgecock, 84, of Hoopeston, IL, passed away at 1:30 P.M. Saturday January 17, 2015 at Heritage Health Therapy & Senior Care in Hoopeston. She was born January 7, 1931, in Richland Center, WI, the daughter of Rev. E.W. and Maude (Keast) Larrabee. She married Byron Eugene Hedgecock on July 16, 1950 at the First Church of the Nazarene in Hoopeston. He preceded her in death on March 23, 2013. She is survived by one son, Bruce Hedgecock of Rantoul, IL; one sister, Esteele Borchardt of Rockford, IL; one special sister-in-law, Peggy (Ollie) Bailey of Hoopeston, IL; two grandchildren, Jason (Karyanna) Hedgecock and Alan (Sarah) Hedgecock; four great-grandchildren, Kylie Rife, Gracelyn Hedgecock, Elliannah Hedgecock and Lyllyan Hedgecock; 3 nieces, Sharon (Denny) Elrick, Janice (Mike) Brees and Bonnie Urich; 2 nephews, Rod (Rosey) Bailey and Phil Bailey and special friends, Bill and Debbie Andrews. She was preceded in death by her parents; one sister, Adeline Kinder; one brother, Halder Larrabee; two nieces, Joyce Kinder and Judy Prior and two nephews, Mark Borchardt and Brad Bailey. Darlene moved to Hoopeston at the age of 13, when her father became a minister. She later worked as a secretary for Dr. Strzembosz for over thirty years. Darlene was a member of the Hoopeston Community Church of the Nazarene for many years. She enjoyed cooking, baking pies, golfing, shopping and going out to eat. Darlene loved her family, especially her grandchildren and enjoyed family get-togethers. A visitation will be held 10:00 A.M. – 12:00 P.M. Wednesday January 21, 2015 at the Hoopeston Community Church of the Nazarene 402 E. Honeywell Ave Hoopeston, IL. The funeral service will follow the visitation and will begin at 12:00 P.M. (Noon) Wednesday at the church, with Pastor Jeff Alexander officiating. Burial will follow in the Floral Hill Cemetery in Hoopeston. Memorials may be made in Darlene’s honor to the Hoopeston Community Church of the Nazarene 402 E. Honeywell Ave. Hoopeston, IL 60942.

The family of Joyce Darlene Hedgecock created this Life Tributes page to make it easy to share your memories.

Joyce Darlene Hedgecock, 84, of Hoopeston, IL, passed away at...

Send flowers to the Hedgecock family.