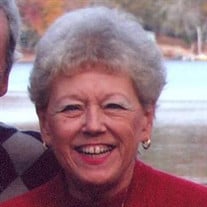 Joyce (Johnson) Glenn, 75, of Georgetown, FL, formerly of Hoopeston, IL, passed to the Lord on Friday November 27, 2015. She was born in Watseka, IL, the youngest of three children, to Walter and Esther (Henneike) Johnson Sr. on September 4, 1940. She married Dale Glenn on June 14, 1959 in Hoopeston, IL. She is survived by her husband, Dale, of 56 years; one son, Bobby (Sandy) Glenn of Monticello, IN; one brother, Walter Johnson of Schaumburg, IL; one sister, Elaine (David) Coxworth of Lawrenceville, GA and several nieces, nephews, and cousins. She was preceded in death by her parents and grandparents. Joyce attended East Lynn public schools. She worked at Food Machinery Corp. in Hoopeston until Dale’s graduation from Eastern Illinois University, and later moved to Joliet, IL, where she was a member of the first graduating Registered Nurse class of Joliet Community College in 1971. After working as an RN for many years at Silver Cross Hospital in Joliet, she retired as Director of Quality Assurance in 1997 and accompanied her husband to Georgetown, FL. Joyce was an avid golfer and served for many years as President of the LOLG Association. She also had a marvelous voice and sang with her husband and others of the Georgetown Karaoke Community for many years, until her health prohibited her from doing so. Joyce was a lifelong member of the Hoopeston First Church of God, and was a woman of great faith, who truly loved people. She was always willing to give everyone a chance and assist them anyway she could. She will be greatly missed by those touched by her love and charity. A visitation will be held 4:00 P.M. – 7:00 P.M. Monday December 7, 2015 at Anderson Funeral Home 427 E. Main St. Hoopeston. The funeral service will be held at 11:00 A.M. Tuesday December 8, 2015 at the funeral home, with Pastor Micah Mobley officiating. Burial will be at the Floral Hill Cemetery in Hoopeston. In lieu of flowers memorials may be made to Haven Hospice Development Department 4200 NW 90th Blvd Gainesville, FL 32606 or South Putnam Christian Service Center 223 N. Summit St. Crescent City, FL 32112.

Joyce (Johnson) Glenn, 75, of Georgetown, FL, formerly of Hoopeston, IL, passed to the Lord on Friday November 27, 2015. She was born in Watseka, IL, the youngest of three children, to Walter and Esther (Henneike) Johnson Sr. on September 4,... View Obituary & Service Information

The family of Joyce Arlene Glenn created this Life Tributes page to make it easy to share your memories.