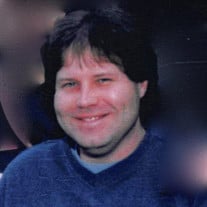 Jon Lloyd “Turtle” Rayls, 47, of Hoopeston, IL, passed at 12:52 P.M. Saturday April 2, 2016 at his home in Hoopeston. He was born July 24, 1968 in Hoopeston, IL, the son of John and Rita (McIntyre) Rayls. He is survived by his mother, Rita Rayls Wagoner; two brothers, Jed (Debbi) Rayls and Jared (Kari) Rayls both of Hoopeston, IL; four nieces, Brittany Rayls Martin, Hannah Rayls, Emma Rayls, and Macy Rayls and his step-father, Mike Wagoner. He was preceded in death by his father John and his grandparents, Richard McIntyre, Joan McIntyre, John F. Rayls, Pampie D. Rayls and Norma L. Rayls. Jon worked as a truck driver for Crop Production Services in Hoopeston. He was a thirty-second degree past master member of the Star Lodge # 709: he also was a member of the Scottish Rites and GAO Grotto both in Danville. Jon was an active member of the Hoopeston Fire Department where he served as the Secretary. He was a history buff and enjoyed music, playing the guitar and traveling. Jon loved his nieces and enjoyed spending time with his family. A visitation will be held 4:00 P.M. – 8:00 P.M. Thursday April 7, 2016 at Anderson Funeral Home 427 E. Main St. Hoopeston, IL. Masonic rites will be held at 7:45 P.M. The funeral service will be held 11:00 A.M. Friday April 8, 2016, at the funeral home, with Larry Baughn officiating. Burial will follow in the Floral Hill Cemetery in Hoopeston. In lieu of flowers, memorials in Jon’s memory can be made to the Hoopeston Star Lodge # 709 or Hoopeston Fire Department C/O Anderson Funeral Home 427 E. Main St. Hoopeston, IL 60942. Please visit www.anderson-funeral-home.com to view Jon’s eternal tribute page and to send the family condolences.

The family of Jon Lloyd Rayls created this Life Tributes page to make it easy to share your memories.

Send flowers to the Rayls family.