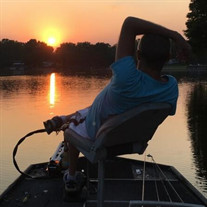 John Charles “Chuck” Smock, 55, of Alvin, IL, passed away at 6:05 A.M. Friday April 21, 2017 at OSF St. Francis Medical Center in Peoria, IL. He was born January 10, 1962, in Danville, IL, to Leroy German and Beverly Romack Curtis. He was adopted and raised by John L. and Dolores (Beck) Smock. He married Tara Morphy on August 20, 1983 at the Rossville Church of Christ. She survives in Alvin. He is survived by his father, John (Shirley) Smock of Pharr, TX; one daughter, Tiffany (Matthew) Cox of Rossville, IL; one son, John T. Smock of Alvin, IL; sisters, Kathy (Michael) Young of Hoopeston, IL, Debbie (Jerry), Rhonda, Linda (Thomas), Becky and Tina (John); brothers, Richard, Steve (April), Jimmy and Rick and three grandchildren, Madeline, Aubrey and Lincoln Cox. He is also survived by two sisters-in-law, Dawn (Steve) Winegardner and Rita (Troy) Roderick and many nieces and nephews who he loved very much. He was preceded in death by his mother, Dolores Smock; his birth parents, Leroy German and Beverly Curtis and his grandparents. Chuck owned Smock Construction for many years before beginning his career with Rise Broadband as a supervisor. He also served as the mayor of Alvin for the past two years. He enjoyed helping others and would do anything and everything people asked him to do. Chuck’s favorite thing to do was to fish at his and Tara’s lake getaway at Lake Hideaway in Kingman, IN. He would say to Tara many times while sitting on the dock, “have I told you Dear, I could do this all day!” He also enjoyed collecting coins. His greatest joy was spending time with his loving wife, his kids who he was very proud of, his three beautiful grandchildren, and other family and friends. Per his wishes, he will be cremated and no services will be held. As mayor of Alvin, Chuck had worked very hard to improve the town so in his memory, memorials may be made to the Village of Alvin, P.O. Box 169, Alvin, IL 61811, help continue his great work.

The family of John Charles "Chuck" Smock created this Life Tributes page to make it easy to share your memories.

Send flowers to the Smock family.