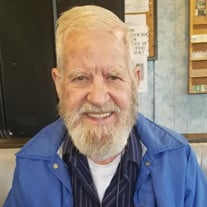 John P. Lithgow, 86, of Hoopeston, IL, passed away at 5:27 P.M. Friday January 8, 2021 at Accolade Health Care of Paxton. He was born July 22, 1934, in rural Hoopeston, the son of Kenneth and Ruth (Mallory) Lithgow. He married Betty Hodel on October 15, 1955. She survives. He is also survived by four sons, Dennis (Becky) Lithgow of Harrison, AR, Dale (Penny) Lithgow of Hoopeston, IL, Doug (Becky) Lithgow of Huntington, IN and Darrel (Kay) Lithgow of New Palestine, IN; one sister-in-law, Donna Lithgow of Paxton, IL; 8 grandchildren, Phil (Lisa) Lithgow, Ashley (Kris) Dukes, Matthew (Dawn) Lithgow, Alesha Berzenye, Adam (Hannah) Lithgow, Alex Lithgow, Nathan Lithgow, and Brent Lithgow; 5 great-grandchildren, James, Harrison, Jasper, Piper, and Chandler; and several nieces and nephews. He was preceded in death by his parents and two brothers, Stanley and Gene. John was a certified steam boiler serviceman. He then worked at FMC in Hoopeston as a certified engineer working on food processing equipment and later helped his son, Dale, at his business, Lithgow Automotive. He served in the United States Army. He was a member of the Antioch Church of Christ where he served as a deacon and was also a member of the Rossville FFA. John enjoyed tinkering around his house and caring for his beloved dog, Scooby. John’s family would like to give a special thank-you to his caretaker, Laurie Wooten. Memorials may be made in John’s name to the Alzheimer’s Association, 8430 W. Bryn Mawr, Suite 800 Chicago, IL 60631. A private family service will be held. Military rites will be accorded by the Hoopeston American Legion Post #384.

The family of John P. Lithgow created this Life Tributes page to make it easy to share your memories.

Send flowers to the Lithgow family.