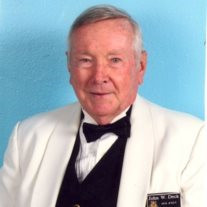 John William Deck, 80, of Tilton, IL, passed away at 11.27 P.M. January 30, 2014 at Prescence United Samaritans Medical Center in Danville, IL. John was born December 29, 1933 in Crawfordsville, IN, the son of Clarence Deck and Leota (Stephenson) Deck. He married Fran Davis on June 12, 1955 in Armstrong, IL. She survives in Tilton, IL. John is also survived by many nieces and nephews. He was preceded in death by his parents. John started working at Sims Garage, Radio Condenser and later worked at the Frey Tire Company. He then became part owner of the Frey Tire Company until his retirement in 1990. After his retirement, John also enjoyed working at the Masonic Temple in Danville, IL. He was a member of the Rossville United Methodist Church, where he and his wife were very involved in many activities. He belonged to the Illiana Antique Car Club, the White Shrine of Jerusalem, Anchor Lodge No. 980 Ancient Free & Accepted Masons of Danville Illinois, where he was a Scottish Rite 33rd Degree Mason, Eastern Star of Illinois Iris Chapter #307 in Danville, IL and Eastern Star of Illinois Danville Chapter #854 in Danville, IL. Together John and Fran enjoyed volunteering at the Rainbow Girls and Jobs Daughters. John enjoyed woodworking, playing cards in his gazebo, watching movies on television, working in his garden and fishing at Moose Lake in Minnesota. His greatest enjoyments were having surprise dinners, traveling with his wife and taking tours in their antique car with the car club. Memorials may be made to the Rossville United Methodist Church 116 Maple St. Rossville, IL 60963 or the Bismarck United Methodist Church 204 S. Chicago Ave Bismarck, IL 61814.

The family of John William Deck created this Life Tributes page to make it easy to share your memories.

Send flowers to the Deck family.