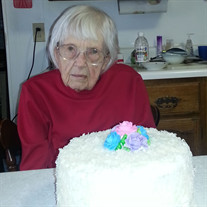 Jessie Lynch, 94, of Hoopeston, IL passed away at 2:00 p.m. Saturday July 26, 2014 at Carle Hoopeston Regional Health Center in Hoopeston, IL. She was born on April 28, 1920 in Milford, IL, the daughter of John Beaver and Cora (Poulter) Tillotson Beaver. She married Louis Schuen on July 28, 1943 in Watseka, IL. He preceded her in death on May 12, 1970. Jessie is survived by daughters, Judy (Marv) Rethelford, of Catlin, IL, Mary Schuske of Hoopeston, IL, and Edye (Tom) Bookwalter of Hoopeston, IL; grandchildren, Louis (Brandi Taylor) Rethelford of Santa Rosa, CA, Angela (Cheryl) Schuske Davidson of Maryville, TN, Jessica (Chris) Denton of Rossville, IL, Lucas (Lisa) Burge of Wellington, IL, and Samantha (Steve) Bruens of Wellington, IL; great-grandchildren, Grace, Faith, and Alyssa Burge of Wellington, IL, Rylee, Karlee, and Emmalee Bruens, of Wellington, IL, and Hope and Ben Taylor of Santa Rosa, CA and many nieces and nephews. She later married Roy Lynch on August 30, 1974 in Hoopeston, IL. He preceded her in death on July 1, 1988. Jessie is also survived by her stepson, Rick (Connie) Lynch of Atlanta, IL and their children Rocky, Rochelle and Richie. She was preceded in death by her parents, five brothers; Buell, John, Paul, Lowell, and Dale, three sisters; Dora, Carol, and Betty and three step-children; Phyllis (Curt) Sollars, Wayne (Frances) Lynch and Larry Lynch. Jessie graduated from Milford Township High School in 1938 and from Illinois State Normal University in 1940, with certification to teach school. She taught in rural schools for 5 years and as a first grade teacher for 18 years, first at Honeywell, then at Maple. While still teaching, she went back to ISU and received her Bachelor’s degree. Jessie was a member of the Hoopeston First Christian Church Disciples of Christ for over 50 years. She taught the adult Sunday school class for many years, was active in CWF and King’s Daughters and she was one of the first women elders in her church. Her favorite hobbies included oil painting, writing poetry and playing bridge and euchre at the Hoopeston Multi-Agency. So her family could be together more she cooked Friday night supper; first for just her married children and then for her grandchildren. While still teaching, when asked what she was having for Friday night supper she would reply, “I won’t know until I go to the grocery store”. Memorials may be made to Hoopeston Area High School C/O Jessie Lynch Memorial Scholarship Fund for Future Teachers 615 E. Orange St. Hoopeston, IL 60942.

The family of Jessie Lynch created this Life Tributes page to make it easy to share your memories.

Send flowers to the Lynch family.