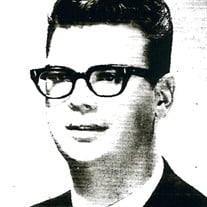 Jerry Lee Collier, 74, of Hoopeston, IL passed away at 9:02 A.M., Saturday November 9, 2019 at the VA Illiana Health Care System in Danville, IL. He was born July 9, 1945, in Danville, IL, the son of Clarence Clyde “Slim” Collier, Jr. and Hazel Marie (Pinnick) Collier. He is survived by his cousins, Pat Wells Burch, Karen Sue Wells (Gerry) Evans, Sadie Beth Evans, and Karen Lee Evans all of Hoopeston, IL and special friends, Tom Weber of Bloomington, IL, Marie Schieler of Hoopeston, IL, Elizabeth Schott of Lancaster, PA, and Carol Arnold of Hoopeston, IL. He was preceded in death by his parents, Clarence and Hazel Collier and grandparents, Leo and Lanie Ethel (Flick) Pinnick, Clarence Clyde Collier, Sr., and Fred and Viola (Tinch) Marks. Jerry attended Maple Grade School, John Greer Jr. High, and Hoopeston High School where he was a 1963 graduate. During his high school years, he was a member of the John Greer Players Drama Club, the Rifle Club, Thespian Troupe 282, and Hall Monitors. He attended Indiana College of Mortuary Science in Indianapolis, IN where he was a member of the 1967 graduating class. He became a National Board-Certified funeral director on September 21, 1967. He later attended the University of Illinois School of Engineering for three years. Jerry then attended Gordon Jewelers Managerial Training and worked for this company for many years until he returned home to take care of his family member during her final illness. He later went through insurance/management training with Blue Cross Blue Shield Insurance Company and worked in their Danville, IL, office until his retirement. Jerry was a member of the United States Army where he served in the Vietnam War. He attended the Church of Christ and the First Church of God, both in Hoopeston. He was an avid reader and enjoyed science fiction books and movies. Jerry was a motorcycle enthusiast and had traveled from coast to coast by cycle, enjoying many festivals, motorcycle jamborees, and roundups. He loved to travel and had always dreamed of taking a tour of Italy someday. Jerry also enjoyed flying in a private plane co-op group. Per his wishes, cremation rites have been accorded. A graveside service will be held at 12:30 P.M. Wednesday November 20, 2019 at Floral Hill Cemetery in Hoopeston, with Pastor David Bowen officiating. Memorials may be made to the Hoopeston Public Library or to the Samaritans Purse Operation Christmas Child (Jerry always enjoyed filling a box for a child each year.)

The family of Jerry Lee Collier created this Life Tributes page to make it easy to share your memories.

Send flowers to the Collier family.