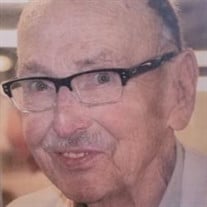 Jay Robert “Bob” or “Ed” Prillaman, Jr., 83, most recently of Vero Beach, FL, passed away peacefully on June 25th, 2019 at Indian River Hospital, Vero Beach, FL. His services will be at 12:30 p.m., Saturday, July 6th at Anderson Funeral Home, 427 E. Main St. Hoopeston, IL. Visitation will be from 11:00 a.m. to 12:30p.m. Burial will immediately follow services at the Rossville Cemetery. Jay Jr. was born May 3, 1936 to Jay R. Prillaman, Sr. and Cleeta (Smith) Prillaman of Rossville, IL. Both preceded him in death. He graduated class salutatorian from Rossville High School in 1954, received a BA in psychology and English with honors from Atlantic Christian College, NC, then received his MS degree in guidance and counseling at Illinois State University. He married Lynn (Goss) of East St. Louis, IL in 1961, had two daughters, then married Betty in 1980. He was proud to have worked for General Electric supporting the Apollo Space program in Daytona Beach, FL by recruiting scientists and engineers that eventually led to the moon landing. He won an award for his work and was honored to add his own “slice of history” and contributions to such an historic project. He then pursued his love of teaching and learning while working with high school students for many years both in Florida and then back home in Illinois. He enjoyed playing and coaching football, basketball, baseball, and golf. He and his wife lived in North Carolina for ten years before retiring and relocating to Vero Beach, FL, where he pursued his passion for teaching and sharing his expertise of bridge with others while personally earning the level of Sapphire Life Master as a member of the American Contract Bridge League. Jay is survived by his loving and devoted wife of 39 years, “Betty” (Myrtle McCoy) Prillaman; two daughters, Lisa (Mark) Goeken-Galliart, Lake Bloomington, IL; Laura (Jim) Steffey, Tremont, IL; three step-children, Diane (Jim) Sibley, Chillicothe, IL; Roger (Sharon) McCoy, Canoe, GA; Mary Hall and Mike Grohskopf, St. Louis, MO; a combined 13 grandchildren and 15 great-grandchildren. Also surviving are his four brothers: Terry Sr. (Sharon), Rossville, IL; Danny (Peg), Bloomington, IL; Gregg (Cindy), Annandale, VA; Roger (Janine), Champaign, IL; and many cousins, nieces, and nephews. Also surviving are brothers-in-law: David (Rhonda) Mixon, New London, IA; Harold (Barbara) Mixon, Laurel, MS; and Howard (Janet) Mixon, Atlanta, GA. Jay had an infectious laugh, was loved and respected by many, and will be deeply missed by his family, friends and all the fierce partners and opponents at the Vero Beach Bridge Club. In lieu of flowers, the family encourages memorials be made to the Vero Beach Bridge Club (VBBC), 1520 14th Ave., Vero Beach, FL 32960, where he was an active member for almost 20 years and whose members recently held a special day in his honor. Memorials will help continue the education and love of the game of duplicate bridge.

The family of Jay Robert "Bob" or "Ed" Prillaman Jr. created this Life Tributes page to make it easy to share your memories.

Send flowers to the Prillaman family.