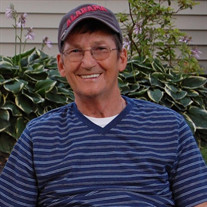 James “Wizzy” Wisdom Jr., 72, of Hoopeston, IL, passed away at 5:45 A.M. Monday August 31, 2015 at Heritage Health Therapy & Senior Living in Hoopeston. He was born July 15, 1943, in Cofer, KY, the son of James and Mabel (Reece) Wisdom Sr. He married Brigitte Riessner and together they had four daughters, Vera (Wil) Johnston of Birmingham, AL, Jamee (Ted) Corallo of Niceville, FL, Tammy (Glenn) Ravens of Wellington, IL and Nicole (Chad) Burke of Birmingham, AL. He later married Laurie Coon on May 17, 2011 in Las Vegas, NV. He is also survived by two sisters, Shirley (Stan) Wagoner of Hoopeston, IL and Pamela Sue Crawford of Newark, OH; ten grandchildren and seven nieces and nephews. He was preceded in death by his parents and his wife, Laurie. Jim worked at Food Machinery Corp. in Hoopeston, IL, for 31 years as a scheduling clerk, until his retirement. He served three years in the United States Army. He enjoyed gambling, golfing, and was an avid Indiana basketball fan. Jim was a scorekeeper for Cornjerker basketball for 22 years. He also coached summer league basketball and freshman baseball for several years. Jim was an avid Cornjerker athletic supporter and was proud of many past and present players that he influenced throughout his coaching career. A visitation will be held 12:00 P.M. – 3:00 P.M. Saturday September 5, 2015 at Anderson Funeral Home 427 E. Main St. Hoopeston. The funeral service will follow the visitation at 3:00 P.M. Saturday September 5, 2015 at the funeral home, with Pastor Adam Taubert officiating. Burial will be at Floral Hill Cemetery in Hoopeston, with military rites being accorded by the Hoopeston American Legion Post #384 and the Hoopeston VFW Buddy Egnew Post #4826. In honor of Jim’s love for sports, memorials may be made to the Hoopeston Area Sports Boosters 615 E. Orange St. Hoopeston, IL 60942

The family of James "Wizzy" Wisdom created this Life Tributes page to make it easy to share your memories.

Send flowers to the Wisdom family.