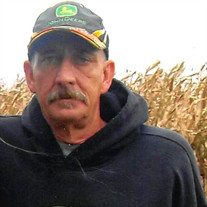 James Edward “Jimi” McPherson, 51, of Milford, IL, passed away at 2:35 A.M. Tuesday, November 15, 2016 at his home. He was born June 12, 1965, in Hoopeston, IL, the son Frank and Wilma (Seitz) McPherson. He married Teri O’Neal on July 9, 2004 in Watseka, IL. She survives in Milford, IL. He is survived by one son, William McPherson of Milford, IL; one sister, Rosemary Reinier of Germany; one brother, Mike (Cassie) McPherson of Arlington, TX and many nieces and nephews. He was preceded in death by his parents; one brother, Frank McPherson Jr.; one niece, April McPherson and one nephew, Blaze Robinson. Jimi worked as a farm laborer at Fanning Farms for several years and farming was his life. He enjoyed gardening, socializing with friends and tinkering with his cars in his garage. He loved his family and especially enjoyed spending time with his son. A visitation will be held 4:00 – 7:00 P.M. Thursday, November 17, 2016 at Anderson Funeral Home 427 E. Main St. Hoopeston, IL. The funeral service will be held at 11:00 A.M. Friday, November 18, 2016 at Anderson Funeral Home, with Pastor Micah Mobley officiating. Burial will follow in Floral Hill Cemetery in Hoopeston. Memorials may be made to Carle Hospice, 206A W. Anthony Dr. Champaign, IL 61822.

The family of James Edward "Jimi" McPherson created this Life Tributes page to make it easy to share your memories.

Send flowers to the McPherson family.