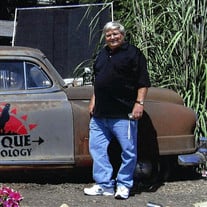 James Richard “Jim” McCormick, 71, of Hoopeston, IL., passed away at 8:19 P.M. on Tuesday, February 6, 2018 at his home. He was born July 2, 1946, the son of Robert and Marguerite (Lithgow) McCormick. He married Vickie Coffing on June 22, 1978 in Rossville, IL. She survives. He is survived by one daughter, Jamie McCormick of Hoopeston, IL.: two sons, Jonathon “Jon” McCormick of San Antonio, TX., and Robert “Rob” (Jamee) McCormick of Hoopeston, IL.: one brother, John McCormick (Darlene Van Pelt) of Hoopeston, IL.: his father – in – law, Robert Coffing of Covington, IN.; four sisters – in – law, Sherry (Steve) Adams, Susan Coffing, Lori (Dave) Campbell, and Jenny (Mike) Summers: three brothers – in – law, Mike (Leslie) Coffing, Todd Coffing, and Curt (Doug) Coffing: three grandchildren, Dyllon McCormick of TX., Owen and Maya McCormick of Hoopeston, IL., many nieces and nephews and his special buddy Jasper the cat. He was preceded in death by his parents, his mother – in – law, Barbara Coffing, and one brother – in – law, Jeff Coffing. In Jim’s early years, he farmed the family farm. He then went to work at FMC, Greene’s Galvanized Stairs, and later Heatcraft. He then returned to farming, most recently working with Skip and Larry Betka on their farm. He served in the United States Army during the Vietnam War and was a member of the Hoopeston American Legion Post 384. A visitation will be held 4:00 P.M. – 7:00 P.M. Friday, February 9, 2018 at Anderson Funeral Home 427 E. Main St. Hoopeston, IL. The funeral service will be held 11:00 A.M. Saturday, February 10, 2018 with Pastor Bruce McQuigg officiating. Following the service Military Rites will be accorded by the Hoopeston American Legion Post 384 at the funeral home. Cremation Rites will be accorded and a burial will be held at a later date at Danville National Cemetery. Memorials may be made to the Covington Community Foundation PO Box 175 135 S. Stringtown Rd Covington, IN 47932, the Hoopeston American Legion 502 E. Penn St. Hoopeston, IL 60942, or to the donor’s choice.

The family of James "Jim" McCormick created this Life Tributes page to make it easy to share your memories.

Send flowers to the McCormick family.