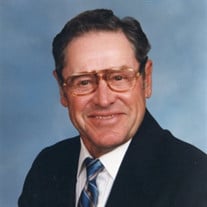 James Russell “Jim” Kaag, 91, of Hoopeston, IL, died of heart complications at Carle Hospital on Tuesday, August 26, 2014. He is survived by his loving wife, Brownie, and their two daughters, Cindy Prillaman and her husband Gregg of Annandale, VA and Jane Schaefer and her husband Gary of Madison, WI. Grandsons are Ben (Torie) Prillaman and their children Jacob, Cameron, Ethan and one-on-the-way of Clifton, VA, Zach (Juliet) Prillaman and their daughter Mae of Fairfax, VA, Jeff Schaefer of Milwaukee, WI, and P.J. (Laura) Schaefer of Chicago, IL. He was preceded in death by his parents. Jim was born December 4, 1922, the only child of Russell and Freda Kaag. He grew up on a farm south of Hoopeston putting in long hours milking cows and farming. He wasn’t enamored with milking but fondly remembered riding his pony to the one-room Red Top School on Rte. 1 where he went for grades 1-8. One of his classmates was his cousin Bob Johnson who has remained a life-long friend. He graduated from John Greer High School in 1940 and then worked in San Diego and Chicago during 1940 and 1941 assembling bombers and cargo planes the US was selling to England and Russia. He enlisted in the Army in early 1942 after the US joined WWII and served in Nebraska, Florida, and Arizona. It was during a leave from the Army in 1944 that Jim met his future wife, Brownie Virginia Lane, of Hoopeston. Jim and Brownie were married on November 30, 1946 and recently celebrated 67 years of marriage. Jim was proud to be a farmer and worked hard to build a good life for his family. But as anyone who knew him will testify, his true passions were his family, fishing, and golf. Some of his happiest moments were fishing and playing golf with his four grandsons. His grandsons loved spending time with him fishing, on the golf course, and on the farm racing lawn tractors and creating mischief of all descriptions. He gave up fishing a few years ago but was still playing golf this Spring at the age of 91! He was a long-term member of the Masonic Lodge #709, the First Christian Church in Hoopeston, the American Legion Post 384 and Hubbard Trail Country Club. He and Brownie also loved to travel, visiting all 50 states in the US and several countries in Europe. They also spent several weeks in Florida most winters where they could fish and play golf while their friends in Hoopeston were scooping snow. Jim was a genuinely good man and his passing is a great loss for his family and his many friends in the Hoopeston community. The family asks that memorials be made to the Hoopeston American Legion 502 E. Penn St, Hoopeston, IL 60942 or the First Christian Church 502 E. Main, Hoopeston, IL 60942.

James Russell &#8220;Jim&#8221; Kaag, 91, of Hoopeston, IL, died of heart complications at Carle Hospital on Tuesday, August 26, 2014. He is survived by his loving wife, Brownie, and their two daughters, Cindy Prillaman and her husband Gregg... View Obituary & Service Information

The family of James R. "Jim" Kaag created this Life Tributes page to make it easy to share your memories.

Send flowers to the Kaag family.