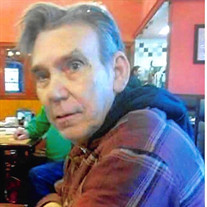 James David Ingram, 71, of Hoopeston, IL, passed away at 1:55 A.M. Friday August 31, 2018 at his home. He was born February 17, 1947, in Iroquois, IL, the son of Sam and Wanda (Adwell) Ingram. He married Carole Whiteman on October 19, 1974 at the First Church of God in Hoopeston. She survives in Hoopeston. He is also survived by one daughter, Amee Bowen of Bismarck, IL; two sons, David Ingram of Hoopeston, IL and Richard (Nicole) Ingram of Bismarck, IL; two sisters, Nancy Hardwick of Hoopeston, IL and Denise Rebsen of Miami, FL; one brother, Charles (Gloria) Ingram of Benton, IL; three sisters-in-law, Marcella Ingram of Indiana, Helen Ingram of Donovan, IL and Sharon Whiteman of St. Joseph, IL; 2 grandchildren; and many nieces and nephews. He was preceded in death by his parents; one sister, Dorothy Johnson; two brothers, Wendell Ingram and Sam Ingram Jr; and three brothers-in-law, Jim Hardwick, George Rebsen, and John Gaskin. James worked at the Milford Canning Company for 22 years. He was a member of the First Church of God in Hoopeston. He enjoyed gardening, tending to his peach trees, collecting model cars and flashlights, and doing word searches. Cremation rites will be accorded, and a visitation will be held 10:00 – 11:00 A.M. Thursday September 6, 2018 at the First Church of God 1004 E. Orange St. Hoopeston, IL. A memorial service will follow the visitation and will begin at 11:00 A.M. Thursday at the church with Rev. David Bowen officiating. Burial will be held at a later date. Memorials may be made to the First Church of God 1004 E. Orange St. Hoopeston, IL 60942.

The family of James David Ingram created this Life Tributes page to make it easy to share your memories.

Send flowers to the Ingram family.