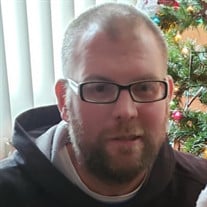 James Marshall Allen, 36, of Hoopeston, IL, passed away at 1:11 P.M. Sunday May 23, 2021 at his home. He was born April 10, 1985, at Blytheville AFB, Arkansas, the son of Rodney Marshall and Judy Charlene (Whiteman) Allen. They survive in Hoopeston. He is also survived by one daughter, Delani Marie Nephew of Danforth, IL; one brother, Mark (Alexandra) Allen of Bellevue, NE; maternal grandparents, Charles and Anna Whiteman of Hoopeston, IL and paternal grandmother, Doris Allen of Hoopeston, IL; and four nieces and nephews, Ava G. Allen, Hannah J. Allen, Nolon C. Allen, and Renner M. Allen. He was preceded in death by his paternal grandfather, Dick Allen. James served in the United States Army in the 82nd Airborne division for 3 years. He then served in the Illinois National Guard and later in the Army Reserves. He had worked for Rich’s Lawncare and several different factories. He most recently worked at Teasdale Foods. James was a member of the Hoopeston United Methodist Church, where he had served on the Appalachia Service Project. He was also a member of the Hoopeston Lion’s Club. A visitation will be held 11:00 A.M. – 1:00 P.M. Friday May 28, 2021 at Anderson Funeral Home 427 E. Main St. Hoopeston, IL. The funeral service will follow the visitation and will begin at 1:00 P.M. Friday at the funeral home with Pastor Jemiriye Fakunle officiating. Burial will follow in Johnson Cemetery near Danville, IL, with military rites being accorded by the Hoopeston American Legion Post #384. Memorials may be made to the American Legion Dornblaser Post #203 Mission K9 Warrior, 106 E. West St. Georgetown, IL 61846 or to the donor’s choice.

James Marshall Allen, 36, of Hoopeston, IL, passed away at 1:11 P.M. Sunday May 23, 2021 at his home. He was born April 10, 1985, at Blytheville AFB, Arkansas, the son of Rodney Marshall and Judy Charlene (Whiteman) Allen. They survive in... View Obituary & Service Information

The family of James Marshall Allen created this Life Tributes page to make it easy to share your memories.