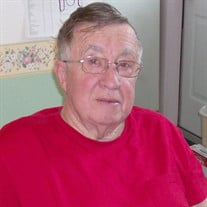 J. Elton Savage, 83, of Hoopeston, IL, passed away at 3:10 A.M. Friday May 4, 2018, at Heritage Health Therapy and Senior Living in Hoopeston, IL. He was born May 14, 1934, in Randolph, KY, the son of Edison and Vera (Shockley) Savage. He married Lela Ashby on December 1, 1962, in Rossville, IL. She survives in Hoopeston, IL. He is also survived by two sons, Greg (Nena) Savage of Tybee Island, Ga and Vince (Kim) Savage of Danville, IL; one sister, Lois (Clayton) Harper of Louisville, KY; one brother, Guy Savage of Sturgis, MI; four grandchildren, Dustin, Kristy, Andy, and Thomas Savage; one great-grandson, Jack Savage; and several nieces and nephews. He was preceded in death by his parents; one sister, Louise; and one brother, Gary. Elton worked in maintenance at Joan of Arc, which later became Pillsbury, in Hoopeston, until his retirement. He enjoyed gardening, watching Nascar, dirt track racing, and spending time with his family. A visitation will be held 11:00 A.M. – 1:00 P.M. Wednesday May 9, 2018 at Anderson Funeral Home 427 E. Main St. Hoopeston, IL. The funeral service will follow the visitation and will begin at 1:00 P.M. Wednesday at the funeral home, with Pastor John Franklin officiating. Burial will follow in Floral Hill Cemetery in Hoopeston. Memorials may be made to the Donor’s Choice.

The family of J. Elton Savage created this Life Tributes page to make it easy to share your memories.

Send flowers to the Savage family.