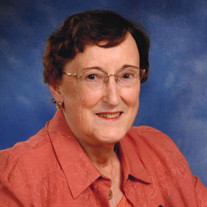 Iris Anne Wagoner, 88, of Rossville, IL, passed away at 5:55 A.M. Saturday October 24, 2020 at Carle Foundation Hospital in Urbana, IL. She was born December 20, 1931 in Rossville, the daughter of Henry Clay and Goldie Ellen (Hughes) Ellis. She married L. George Wagoner on July 24, 1949, in Rossville. He preceded her in death. She is survived by one daughter, Cathy (Harry) Walker of Paris, IL; one son, Jeff (Marsha) Wagoner of Williamsport, IN; 4 grandchildren, Naomi (Josh) Gross, Steve (Angie) Wagoner, Deborah (Jeffrey) Berlier, and Stacey Wagoner; 10 great-grandchildren, Victor (Kaylin) Walker, Emalie (Morgan) Mitchell, Honor and Vivian Gross, Caitlyn Wagoner, Kylie, John, and Luke Knutson, and Luke and Leila Berlier; one great-great-grandchild, James Walker; and several nieces and nephews. In addition to her husband, she was preceded in death by her parents; one son, Chris; and one brother and sister-in-law, Harmon and Irene Ellis. Iris worked at multiple manufacturing businesses including General Electric and Gulbranson. She co-owned The Cut - Up Shop in Rossville from 1984 – 1995. She was also a seamstress and enjoyed doing alterations for people. Iris was a member of the Rossville Church of Christ. She served as a volunteer at the Hoopeston Multi Agency and the Rossville Historical Society. In addition to sewing, her hobbies included gardening and genealogy. A graveside service will be held at 10:00 A.M. Friday October 30, 2020 at Rossville Cemetery with Pastor Kevin Purdy officiating. Memorials may be made to the Hoopeston Animal Rescue Team 901 W. Main St. Hoopeston, IL 60942, the Rossville Historical Society P.O. Box 263 Rossville, IL 60963, or the Rossville Church of Christ 514 E. Attica St. Rossville, IL 60963.

The family of Iris Anne Wagoner created this Life Tributes page to make it easy to share your memories.

Send flowers to the Wagoner family.