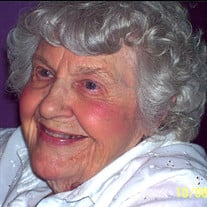 Virginia Irene McMurray, 97, of Hoopeston, IL, passed away at 11:50 A.M. Tuesday, July 8, 2014 at the Champaign County Nursing Home in Urbana, IL. She was born July 7, 1917, in Rogers, Arkansas, the daughter of Charles & Mabel (Jenkins) Royster. Irene was raised in Catlin IL. She married Harold McMurray and raised their family in Hoopeston IL. Irene was preceded in death by her husband; parents; brothers, Jack Royster & Chuck Royster and her oldest son, Denny McMurray. Surviving is her youngest son, Dick McMurray of Urbana IL and his wife Jeanne. In addition to her children, she had 6 grandchildren - Kim Daughtery (Tom), Darin McMurray (Barbara), Mike McMurray (Annie) all of Ft Myers, FL, Rich McMurray (Kristin) and Shelly Cekander (Robby) both of Savoy, IL and Brooke Farrant (Shane) of Lake in the Hills, IL. Irene was also blessed with 12 great-grandchildren, Whitney, Jordie, Matthew, Sydney, Olivia, Mackenzie, Quinn, Grace, Hayden, Charlie, Morgan and Kennedy. She was affectionately known by her grandchildren as "Gamie". Irene was employed at various times through the years at Avon, where she was one of the 1st area sales representatives. She also worked at Hoopeston Hospital and later retired from CBS Musical Instruments. She was a member of the Hoopeston United Methodist Church. Of her many blessings in life, her children, grandchildren and great grandchildren were the most cherished. She was lovingly adored by her family and will be missed until we see her again in our Lord’s heaven with Jesus Christ, Our Savior.

The family of Irene McMurray created this Life Tributes page to make it easy to share your memories.

Virginia Irene McMurray, 97, of Hoopeston, IL, passed away at...

Send flowers to the McMurray family.