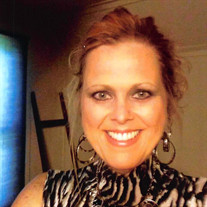 Holly Suzanne White, 43, of Watseka, IL, passed away at 10:36 A.M. Sunday May 6, 2018 at Riverside Medical Center in Kankakee, IL. She was born January 16, 1975, in Danville, IL, the daughter of Phyllis Jean O’Neal White. She is survived by one son, Garrett White of Watseka, IL; one sister, Amy White of Milford, IL; one half-brother, Anthony Lane of Ocala, FL; and two nieces, Emily Buhrmester of Milford, IL and Heather Scott of Sheldon, IL. She is also survived by long-time family friends, Shawn Lane, Angel Coburn, Norma Clawsen, & Deana Clawsen. She was preceded in death by her mother, Phyllis White; one son, Grayson White; and maternal grandparents, Arvil and Ruby O’Neal. Holly worked as a home healthcare provider and had previously worked as a correctional officer. She was a member of the State Line Riders Motorcycle Club (A.B.A.T.E). She loved crafts, sports, and was a volleyball official. Cremation rites will be accorded, and a visitation will be held 4:00 – 7:00 P.M. Monday May 14, 2018 at Anderson Funeral Home 427 E. Main St. Hoopeston, IL. A private memorial service will be held. Memorials may be made to the family of Holly White, C/O Anderson Funeral Home 427 E. Main St. Hoopeston, IL.

The family of Holly White created this Life Tributes page to make it easy to share your memories.