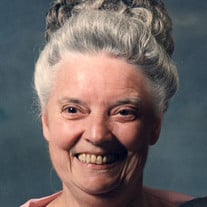 Helen Kathern (Banks) Murry, 77, of Hoopeston, IL, passed away at 11:15 A.M. Wednesday May 20, 2015 at her home. She was born October 11, 1937 in Albion, IL, the daughter of Jim and Lena (Vincent) Banks. She married Kenneth Murry on December 3, 1955 in Hoopeston, IL. He survives in Hoopeston. She is survived by two daughters, Cynthia (Kevin) Cadman of Gibson City, IL and Sherlyn (Gary) Arivett of Henning, IL; five granddaughters, Renae Cadman, Megan Cadman, Tiffany Linares, Amber Wilkey and Stacey (Alex) Sanchez; four great-grandchildren, Karsyn Linares, AJ Linares, Charles Linares, and Dominic Sanchez and several nieces and nephews. She was preceded in death by her parents; sisters, Opal (Bob) Anselment, Virginia (Clifford) Brock, and Anna Bell (Frank) Wigley; brother, Herman (Mary) Banks and twin infant siblings. Helen was a homemaker, performing many tasks. She also worked for the telephone company and a couple of different factories, while her children attended school. She attended the First Apostolic Church in Hoopeston, where she was very much involved. She was the church secretary for several years, a Sunday school teacher, song leader and sang in the choir. She loved going door to door and visiting with others, telling them about the Lord. Helen had several hobbies which included crocheting, sewing, cooking, baking, working puzzle books and reading, especially her Bible. She didn’t like being outside because of the bugs and heat, so her idea of going camping was sitting in the trailer reading a book. Helen loved her family and enjoyed spending time with them. She also enjoyed babysitting her grandchildren. The funeral service will be held at 1:00 P.M. Tuesday May 26, 2015 at the Shiloh Apostolic Church 435 S. Main St. Henning, IL, with Pastor John Koonce officiating. The visitation will be held prior to the funeral service from 11:00 A.M. – 1:00 P.M. Tuesday, May 26, 2015 at the church. Burial will be held at Floral Hill Cemetery in Hoopeston. Memorials may be made to the First Apostolic Church 205 E. Penn St. Hoopeston, IL 60942.

The family of Helen Kathern Murry created this Life Tributes page to make it easy to share your memories.

Send flowers to the Murry family.