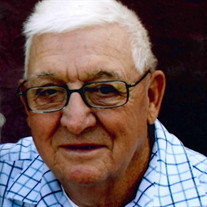 Harvey George Phillips, 83, of Alvin, IL, passed away at 7:32 P.M. Wednesday April 24, 2019 at Carle Foundation Hospital in Urbana, IL. He was born October 1, 1935, in Danville, IL, the son of Kenneth S. and Violet (Rush) Phillips. He married Martha Marie Pettice on December 26, 1958, at the Alvin Church of God. She survives in Alvin. He is also survived by two sons, Casey (Janice) Phillips of Bismarck, IL and Bruce Phillips of Rossville, IL; two sisters, Joy (Ben) Day of Lafayette, IN and Latina (Ray) Hunt of Bismarck, IL; five grandchildren, Eric (Misty) Phillips of Oakwood, IL, Kurt (Miranda) Phillips of Covington, IN, Greg Phillips of Alvin, IL, Terri (Tim) Foley of Covington, IN, and Chyanna Phillips of Alvin, IL; 8 great-grandchildren and one on the way; and 11 nieces and nephews. He was preceded in death by his parents; one sister, Brenda; and one brother, Darrell. Harvey retired from the Carpenters Local 243 in Champaign. He later became the South Ross Road Commissioner for 16 years. He was also the Sexton for Gundy Cemetery for 60 years. Harvey served in the United States Army from July 1958 – July 1960. He was a member of the Alvin Church of God and the I & I Tractor Club. A visitation will be held 3:00 – 6:00 P.M. Monday April 29, 2019 at the Alvin Church of God 109 South St. Alvin, IL. The funeral service will follow the visitation and will begin at 6:30 P.M. Monday at the church with Pastor Dan Hunt officiating. A graveside service will be held at 10:30 A.M. Tuesday April 30, 2019 at Gundy Cemetery in Bismarck, IL. Military rites will be accorded by the Hoopeston American Legion. Memorials may be made to the National Kidney Foundation, 30 East 33rd Street, New York, NY 10016 or the American Diabetes Association, 2451 Crystal Drive, Suite 900 Arlington, VA 22202.

The family of Harvey George Phillips created this Life Tributes page to make it easy to share your memories.

Send flowers to the Phillips family.