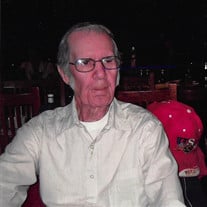 Harry Marshall “Dick” Allen, 82, of Hoopeston, IL., passed away at 5:30 A.M. Tuesday, March 6, 2018 at Palm Terrace in Mattoon, IL. He was born September 30, 1935, the son of Harry and Wilma (Eades) Allen. He married Doris Hickerson on September 13, 1958 at the Nazarene Church in Hoopeston. She survives. He is survived by two sons, Rodney (Judy) Allen of Hoopeston, IL and Michael (Kathy) Allen of Laurel, MD.; six grandchildren, Brandon, James, Mark, Aaron, Tammy, and Kaitlyn; eleven great-granddaughters and four-great grandsons, and several nieces and nephews. He was preceded in death by his parents; two sisters, China and Dell; three brothers, William, Leonard, and Steve; and two infant brothers. Dick was retired. He was drafted into the Army in 1958 and served for two years. He enjoyed stockcar racing and going fishing. He also enjoyed singing in the area for churches, weddings, and funerals for the past 55 years. A visitation will be held 12:00 P.M. – 1:00 P.M. Friday, March 9, 2018 at Anderson Funeral Home 427 E. Main St. Hoopeston, IL. The funeral service will follow the visitation at 1:00 P.M., with Pastor Cathy Najmon officiating. Burial will follow in Floral Hill Cemetery in Hoopeston. Memorials may be made to the donor’s choice.

The family of Harry Marshall "Dick" Allen created this Life Tributes page to make it easy to share your memories.