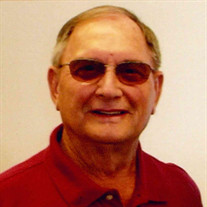 Harold Morgan, 83, of Hoopeston, IL, passed away at 11:12 P.M. Wednesday July 22, 2015, at Carle Hoopeston Regional Health Center in Hoopeston. He was born September 30, 1931, in Liberty, KY, the son of Robert T. and Eva (Davenport) Morgan. He married Jean Long in Fort Smith, Arkansas on June 2, 1953. He is survived by his loving wife of 62 years, Jean; his dog, Lady, who was his constant companion and two special caregivers, Sherry Shipman and Mary Ducharme. He was preceded in death by his parents. Harold farmed in the Rossville/Hoopeston area and also owned and operated MoCom Radio Sales, until his retirement. He served in the United States Army from 1952-1954, serving most of his time in Salzburg, Austria. Harold collected John Deere memorabilia, was an avid basketball fan and enjoyed fishing and mowing the grass. A visitation will be held 2:00 – 5:00 P.M. Sunday July 26, 2015 at Anderson Funeral Home 427 E. Main St. Hoopeston, IL. The funeral service will be at 11:00 A.M. Monday July 27, 2015 at the funeral home, with Rev. James Lloyd officiating. Burial will follow in the Rossville Cemetery. Memorials may be made to Iroquois Memorial Hospice 200 Laird Ln, Watseka, IL 60970, Shriners Hospitals for Children 2900 Rocky Point Dr. Tampa, FL 33607 or the donor’s choice.

The family of Harold Morgan created this Life Tributes page to make it easy to share your memories.

Send flowers to the Morgan family.