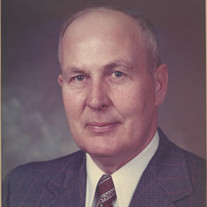 Harold Eugene Cox, 94, of Hoopeston, IL passed away at 2:00 P.M. Saturday, June 14, 2014 at the VA Freedom House in Danville, Illinois. He was born May 4, 1920 in Rural Rossville, Illinois, the son of Roy B. and Florence (Dazey) Cox. He married Naomi E. Greenwood on June 29, 1941. She preceded him in death on May 31, 1991. He is survived by sons, Howard E. (Sharon) Cox of Sun Lake, Arizona and Lloyd L. (Carmela) Cox, of Hoopeston, IL; daughter, Ellen M. Scharlach of Hoopeston, IL; nine grandchildren, eighteen great-grandchildren, three great- great-grandchildren and many nieces and nephews. He was preceded in death by his parents, two brothers and one sister. Harold began working at FMC in Hoopeston, IL and then worked at Clearing Machine in Chicago. He later worked as Vermilion County Treasurer from 1950-1954 and sold insurance as an Independent Agent for 37 years at the Hoopeston Insurance Agency. Harold served in the United States Army, in the Rifleman 74B Company. He served in WWII under General Patton’s 3rd Army, 379th Company E. While serving, he was in the France and Rhineland Campaign. He received a Purple Heart, Good Conduct Ribbon, European African Middle Eastern Theater Ribbon, and Two Bronze Campaign Stars. Harold was a life member and past Commander of the V.F.W. Post 4826, the American Legion Post 384 and the Disabled Veterans Post #18. He was Past President of the Lion’s Club, Chamber of Commerce, and Hoopeston Industrial Corp. He was a past Grant Township Supervisor, an Associate Jaycee member, and a member of C.A.R.E.(Citizens Against Ruining the Environment). Harold served on the Hoopeston School Board for 8 years and belonged to the Shangri La Club. He was a member of the Hoopeston United Methodist Church. Harold was a member of the Illinois Wildlife Federation and he loved hunting, fishing and boating. He also enjoyed football and worked with the Little League for many years. Memorials may be made to the Freedom House/Voluntary Service 1900 E. Main St. Danville, IL 61832.

The family of Harold Eugene Cox created this Life Tributes page to make it easy to share your memories.

Send flowers to the Cox family.