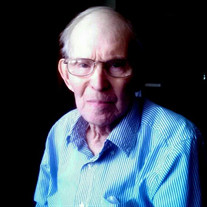 Hale F. Burge, 92, of Sherman, IL, formerly of Hoopeston, IL, passed away at 10:01 A.M. Wednesday April 1, 2015 at the Villa Health Care East in Sherman, IL. He was born May 21, 1922, in Boswell, IN, the son of Henry J. and Eva (Burton) Burge. He married Grace Elizabeth Freeman on February 8, 1947 in Watseka, IL. She preceded him in death on October 8, 2011. He is survived by three sons, Randy (Susan) Burge of Sherman, IL, Russell (Elaine) Burge of Hoopeston, IL and Douglas (Jo Ann) Burge of Bismarck, IL; one sister, Opal Blakey of Hoopeston, IL; 10 grandchildren; 22 great-grandchildren and several nieces and nephews. He was preceded in death by his parents; one son, Alan F. Burge and seven siblings, Salathiel H. Burge, Harold Emory Burge, Carvie Oren Burge, Carthiel Linville Burge, Lura Lorene Burge, Cecil Forest Burge and Lloyd Kenneth Burge. In 1942, Mr. Burge was drafted and was assigned to the Army Air Corp. After training, he was assigned to the 32nd Service Squadron on the island of Shemya in the Aleutian Islands, Alaska, where he served for two years before the war ended. After the war Hale returned to Hoopeston, but he soon found he missed working on aircraft and life in the military. After about nine months of civilian life he returned to the Army Air Corp. On June 30, 1963 he retired from the Air Force after twenty years of service. He returned to Hoopeston and worked as a machinist for 21 years for Food Machinery Corporation, until his retirement. He was presented the Lifetime Achievement Award by the Safety Program Illinois – Aviation Safety Association Professionals at their annual continuing education seminar on March 1, 2012 in Springfield, IL. The SPI-ASAP, together with the Federal Aviation Authority and the Illinois Department of Transportation, annually honors individuals they feel have made important contributions to aviation safety. Hale enjoyed traveling, gardening, bicycling, attending Air Force reunions and spending time with his family. A visitation will be held 10:00 – 11:30 A.M. Saturday April 11, 2015 at Anderson Funeral Home 427 E. Main St. Hoopeston, IL. The funeral service will follow the visitation and will begin at 11:30 A.M. Saturday at the funeral home, with Pastor Adam Taubert officiating. Burial will follow in the Floral Hill Cemetery in Hoopeston. Military rites will be accorded by the Hoopeston American Legion Post 384 and the Hoopeston VFW. In lieu of flowers, memorials may be made to The First Baptist Church 323 E. Seminary Ave. Hoopeston, IL 60942 or the Hoopeston American Legion Color Guard 502 E. Penn St. Hoopeston, IL 60942.

The family of Hale F. Burge created this Life Tributes page to make it easy to share your memories.

Send flowers to the Burge family.