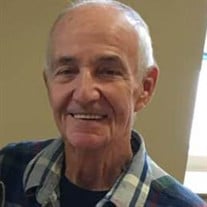 Gregory Joe “Greg” Baird, 71, of Henning, IL, passed away at 2:25 P.M. Monday December 16, 2019 at OSF St. Francis Medical Center in Peoria, IL. He was born March 11, 1948, the son of Joseph Samuel and June (Kelley) Baird. He married Catherine Gooden in 1974 in Spartanburg, SC. She survives in Henning. He is also survived by two sons, Greg Baird Jr. (Cammy Hufford) of Danville, IL and Bill (Heather) Baird of Pesotum, IL; two grandchildren, Joseph and John Baird; one brother-in-law, William “Bill” Boose of Hoopeston, IL; and one nephew, Mike (Georgia) Boose. He was preceded in death by his parents; one sister, Carol Boose; and one nephew, Damon Lane. Greg served in the United States Navy. He was a self-employed truck driver whom owned and operated Baird Trucking with his two sons. He was previously employed by Rossville-Alvin School District as a bus driver and grounds maintenance. He had a positive impact on many young lives during employment at the school. Greg enjoyed pulling at local truck and tractor pulls and volunteering at the Rossville tractor pull. He loved watching Nascar and spending time with his family. Greg was a vital part of the Rossville United Methodist Church family. He loved Jesus and was a fervent evangelist sharing his testimony and inviting many to join him at Men’s Breakfast and or worship. His quest for biblical knowledge and practical use of that knowledge inspired the people around him to strive to be better themselves. As a chairman of the outreach ministry of the church, Greg was constantly challenging the church to find more ways to be the hands of Jesus in the Rossville community. His work in the church will be remembered for years to come due to the many lives he touched. A visitation will be held 4:00 – 7:00 P.M. Friday December 20, 2019 at the Rossville United Methodist Church, 116 Maple St. Rossville, IL. The funeral service will be held at 11:00 A.M. Saturday December 21, 2019 at the church, with Pastor Chris Quick officiating. Military rites will be accorded by the Hoopeston American Legion Post #384. Following the service, cremation rites will be accorded, and burial will be held at a later date at Mann’s Chapel. Memorials may be made in Greg’s memory to the Rossville United Methodist Church local outreach program C/O Rossville United Methodist Church 116 Maple St. Rossville, IL 60963.

The family of Gregory Joe "Greg" Baird created this Life Tributes page to make it easy to share your memories.

Send flowers to the Baird family.