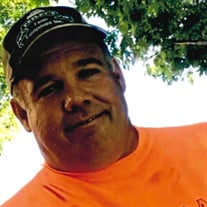 Gregory Joe “Junior” Baird II, 45, of rural Danville, IL, passed away 8:15 A.M. Wednesday January 5, 2022, at his home. He was born October 22, 1976, in Hoopeston, IL, the son of Gregory Joe and Catherine (Gooden) Baird Sr. He married Cammy Elizabeth Green on July 11, 2020, at the Rossville United Methodist Church. She survives in rural Danville. He is also survived by his mother, Catherine Baird of Henning, IL; one brother, Bill (Heather) Baird of Pesotum, IL; one step-daughter, Ashton (Eli) Cousins of Dubuque, IA; one step-son, Kyle Hufford of Ogden, IL; one aunt, Jane Lane of Hoopeston, IL; one uncle, William “Bill” Boose of Hoopeston, IL; 6 grandchildren, Trentyn, Zachary, and Archer Hufford and Ryylan, Rynlee, and Rayden Cousins; and two nephews, Joseph and John Henry Baird. He was preceded in death by his father, Gregory Baird Sr., and his grandparents. Greg owned and operated Baird Trucking with his father and brother where he later assumed full ownership. He was a member of the Rossville United Methodist Church where he loved his church family and served on several committees. He loved listening to bands at Lola’s in Potomac, pulling his semi with his dad and brother, and collecting model semis. Greg had a selfless passion for helping others and will be truly missed by those who knew and loved him. A visitation will be held 4:00 – 7:00 P.M. Tuesday January 11, 2022, at Rossville United Methodist Church 116 Maple St. Rossville, IL. The funeral service will be held at 11:00 A.M. Wednesday January 12, 2022, at the church with Pastor Chris Quick officiating. Following the service, cremation rites will be accorded. Memorials may be made to the Rossville United Methodist Church 116 Maple St. Rossville, IL 60963.

The family of Gregory Joe "Junior" Baird II created this Life Tributes page to make it easy to share your memories.

Send flowers to the Baird family.