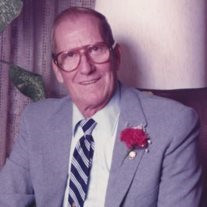 Glenn Edward “Satch” Brandenburg, 88, of Hoopeston, IL, passed away at 4:10 A.M. Thursday February 6, 2014 at the Carle Hoopeston Regional Health Center in Hoopeston. He was born June 19, 1925, in West Lebanon, IN, the son of William Edward and Nora (Burton) Brandenburg. He married Emma Fetters on July 12, 2002 at the First Church of Christ in Danville, IL. She survives in Hoopeston. He is survived by two daughters, Brenda Tyler of Danville, IL and Carol (Chuck) Lundgren of Danville, IL; one step-son, Brad Vollstedt of La Jolla, CA; one sister, Mary Katherine Hall of Cordele, GA; four grandchildren, Heidi LaBounty, Amy Kirts, Stacey Griffith and Bill Lundgren; five great-grandchildren, Ethan LaBounty, Evan LaBounty, Alexandria Griffith, Kaleb Griffith and Henry Griffith and several nieces and nephews. He was preceded in death by his first wife Helen Brandenburg who passed away on July 20, 2001; his parents and three brothers. Glenn began working as a mechanic at the Ford garage. He then became the owner of the Shell Filling Station in Hoopeston and later worked at Food Machinery Corp., where he retired after 30 years. He served in the United States Army during World War II and went on the Honor Flight to Washington D.C. in 2012 to see the war memorials. He attended the First Christian Church Disciples of Christ in Hoopeston and later attended the Chestnut Street Church of Christ in Hoopeston, where he served as a board member. Glenn was a member of the Hoopeston American Legion Post #384 and the Hoopeston VFW Post #4826. He was a bus driver for the Hoopeston Multi-Agency, where he also volunteered doing many jobs. Glenn enjoyed picking up cars for local dealerships, fishing, camping, woodworking, race cars and doing mechanical work. Memorials may be made to the Chestnut Street Church of Christ Building Fund 709 E. Chestnut St. Hoopeston, IL 60942.

The family of Glenn Edward "Satch" Brandenburg created this Life Tributes page to make it easy to share your memories.

Send flowers to the Brandenburg family.