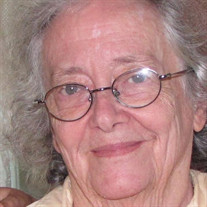 Georgia Willadean (Storie) Stone's life was one defined, in belief and practice, by boundless love. To know her was to be loved by her, to be tenderly cared for, to be nourished in mind, body and soul. Born on November 10, 1935 to parents Alfred and Catherine Storie, Georgie spent the early part of her life in Byrdstown, TN. As a young wife, Georgie and her husband, Granville Stone, moved north to Hoopeston, IL where she worked factory jobs before opening a home daycare that she would continue to run for 50 years. Through her diligent care, Georgie essentially helped to raise hundreds of children, in some cases caring for multiple generations of the same families. Georgie lovingly raised her own four children alongside tending to the needs of so many others. She was a skilled and avid gardener, dedicated to coaxing life from the land she lived on. She fed her family and friends from the bounty of her beloved garden, canning and sharing all that she grew. Her drive to help feed those around her was not limited to the people who filled her house. Her care extended to squirrels, birds, and feral cats who knew they would be met with kindness and food at Georgie's door. She went so far as to make peanut butter sandwiches for squirrels who came to paw at her door and take food from her hands. Toward the end of Georgie's life, when she began to refuse food for herself, she still fretted that the animals would need to be fed. Her concern, always, was that the vulnerable were cared for. Georgie had a sense of humor she would share with all, and a stubborn streak that only her most beloved typically witnessed. She loved to travel to Tennessee to visit family and friends, and enjoyed bus trips, exploring places like Branson, Missouri. Georgie left this earth on July 16, 2016. She was preceded in death by her parents, one half-sister, and her husband. Georgie is survived by four children: Sherlyn (Barry) Huffman, Scott Stone, Robyn Stone, and Patrick Stone, along with numerous grandchildren, great-grandchildren, and one great-great grandchild. Her legacy is one of love that continues in perpetuity. A visitation will be held 4:00 – 7:00 P.M. Wednesday July 20, 2016 at Anderson Funeral Home 427 E. Main St. Hoopeston, IL. A graveside service will be held at 11:00 A.M. Thursday July 21, 2016 at the Danville National Cemetery in Danville, IL, with Rev. Sid Payne officiating. Burial will be in the Danville National Cemetery. Memorials may be made in Georgia’s honor to The Alzheimer’s Foundation of America 322 8th Ave, New York, NY 10001.

Georgia Willadean (Storie) Stone's life was one defined, in belief and practice, by boundless love. To know her was to be loved by her, to be tenderly cared for, to be nourished in mind, body and soul. Born on November 10, 1935 to parents Alfred... View Obituary & Service Information

The family of Georgia Willadean Stone created this Life Tributes page to make it easy to share your memories.

Georgia Willadean (Storie) Stone&#39;s life was one defined, in belief...

Send flowers to the Stone family.