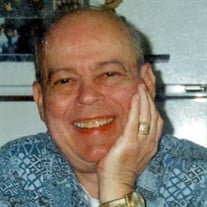 George William “Bill” James, 86, of Clearwater, passed away on Sunday, October 20, 2019 peacefully at home after a long illness with his wife, Ann Myrece by his side. Bill had many interests – from photography to model railroading to magic to travel to reading, especially mysteries and biographies. He also loved music and played the trumpet and piano and was a proud member of the 118th Army Band when he served from 1956 to 1958. A native of Hoopeston, Illinois, Bill grew up in the small town near the Indiana border where his father managed the local men’s clothing store. He was the only child of George and Lillian (Lockhart). James was born on October 3, 1933 in Danville, Illinois. Growing up, he spent so much time with his love of books at the Hoopeston Public Library that the librarian was disappointed he chose to go into accounting rather than library science. Bill received his bachelor’s degree in accountancy from the University of Illinois, Urbana in 1956. Most of his working life was spent as a CPA at Inland Steel Co. in Chicago. He started out in the container division in 1959 and transferred to the general offices in 1967, where he advanced to assistant manager of accounting research and practices. In Illinois, he was active in the Masonic Lodge and Scottish Rite Freemasonry. In 1983, Bill met his future wife, Ann Myrece Schwartz, at a magic convention in Grand Rapids, Michigan. Ann Myrece, a performing magician from Bridgeport, Connecticut, and Bill shared a love of magic and the history of magic. He was a lifetime member of the Society of American Magicians. Ann Myrece and Bill dated for several years and married on April 11, 1992 at Unity Hill United Church of Christ in Trumbull, Connecticut. After retiring, Bill relocated to Florida in 1987 and built his dream home in Clearwater in 1989. Besides his wife, Ann Myrece, Bill leaves a cousin, Jean Drinkut of Arcadia, Florida, and her daughters Paula Alvarez of Miami, Florida and Dawn Paura of Winter Park, Florida. Celebration of Life Gathering will be 2-5 pm Thursday Oct. 24th at Sylvan Abbey Funeral Home, 2853 Sunset Point Rd., Clearwater, Florida 33759. A graveside service will be held at 11:00 am on Monday October 28th at Floral Hill Cemetery in Hoopeston, Illinois with Pastor Richard Lewis officiating. In lieu of flowers, please consider making a tax-deductible donation to the Morton Plant Mease Health Care Foundation, 1200 Druid Road South, Clearwater, FL 33756. (give.mpmfoundation.org/donate)

George William &#8220;Bill&#8221; James, 86, of Clearwater, passed away on Sunday, October 20, 2019 peacefully at home after a long illness with his wife, Ann Myrece by his side. Bill had many interests &#8211; from photography to model railroading... View Obituary & Service Information

The family of George James created this Life Tributes page to make it easy to share your memories.

George William “Bill” James, 86, of Clearwater, passed away on...

Send flowers to the James family.