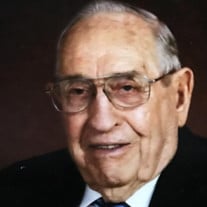 George Edward Houmes, 96, passed away on Sunday January 13, 2019. He was born August 12, 1922 to Date A. and Mary (Tilton) Houmes at the family farm in Hoopeston, IL. He attended elementary school at Victor school located in Prairie Green Township. He graduated from John Greer High School in 1940. George married Edith Jaynes, a class mate, on August 6, 1940. They lived on and were involved in the operation of the family farm until retirement in 1984. In 1945 and until 1982 he was active in various positions in the plant food industry. In 1945, he owned and operated Hoopeston Fertilizer Co., later selling to the Stipp family. From that time until retirement he held management positions with major plant food companies. George was very civic minded and felt it was important to be involved in local affairs. He served on the Wellington School Board, the Iroquois County Board and the Hoopeston Community Hospital Board. During his retirement years, in Texas, he served as Treasurer of the Lagarto Volunteer Fire Department and as president of the Carmel Hills Property Owners Association. He was a member of the Hoopeston Masonic Star Lodge #709 for over fifty years, a member of the Valley of Danville Scottish Rite for over fifty years and a proud member of Alamin Shrine in Corpus Christi, TX, until his death. He was a member of the Arlington Heights Church of Christ in Corpus Christi, TX. George owned and enjoyed several Harley Davidson motorcycles. His pride and joy was a 1998 heavily chromed parade bike that he rode in Shrine parades. On October 4, 2008, he joined in marriage to Barbara Y. Young. They enjoyed traveling and spending time together at their home on Lake Corpus Christi. He was preceded in death by his wife, Edith, of over 67 years; his parents; one son, Dan V. Houmes; three sisters; one brother; one great-granddaughter; two step-daughters; and one step-granddaughter. He is survived by his wife, Barbara; one daughter, Gayle Karen Rush; one son, Date A. “Chip” (Cindy) Houmes; one daughter-in-law, Sandy Houmes; thirteen grandchildren; nine great-grandchildren; three great-great-granddaughters; one step-grandson; two step-great-grandsons; and numerous nieces and nephews. A visitation will be held 4:00 – 7:00 P.M. Thursday January 17, 2019 at Anderson Funeral Home 427 E. Main St. Hoopeston, IL. A masonic service will follow at 7:00 P.M. The funeral service will be held at 11:00 A.M. Friday January 18, 2019 at the funeral home, with Rev. Dustin Wells officiating. Burial will be in Floral Hill Cemetery in Hoopeston. Memorials may be made to the Prairie Green Church of Christ 278 N 2800 EAST Rd, Hoopeston, IL 60942 or the Hoopeston Masonic Star Lodge #709 208 W Orange St, Hoopeston, IL 60942.

George Edward Houmes, 96, passed away on Sunday January 13, 2019. He was born August 12, 1922 to Date A. and Mary (Tilton) Houmes at the family farm in Hoopeston, IL. He attended elementary school at Victor school located in Prairie Green... View Obituary & Service Information

The family of George Edward Houmes created this Life Tributes page to make it easy to share your memories.

Send flowers to the Houmes family.