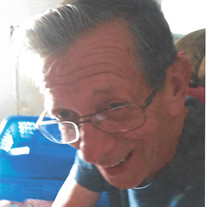 Gary Russell Ferguson, Sr., 73, of Rantoul, IL, passed away at 11:58 P.M. Monday November 27, 2017 at his home. He was born February 1, 1944, in Milwaukee, WI, the son of Clarence Joseph and Flora Lillian Mae (Poppendieck) Ferguson. He married Donna Jeannette Whiteman on April 6, 1968 at the First Church of God in Hoopeston. She survives in Rantoul, IL. He is also survived by two sons, Gary Russell (Naomi) Ferguson of Melbourne, FL and Dion Michael (Kristi) Ferguson of Dewey, IL; one sister, Carol McConaha; one brother, Richard Ferguson; two grandchildren, Andrew Douglas Ferguson and Paige Nicole Ferguson both of Dewey, IL and several nieces and nephews. He was preceded in death by his parents; one son, Brent Douglas Ferguson; one brother, Ronald Ferguson; one brother-in-law, Donald McConaha and one sister-in-law, Juanita Ferguson. Gary worked at Rantoul Products in Rantoul, IL until his retirement. He attended the Dewey Community Church in Dewey, IL and he loved to go fishing. Per his wishes he will be cremated. A visitation will be held 4:00 – 7:00 P.M. Friday December 1, 2017 at the Dewey Community Church, 16 3rd St. Dewey, IL. A memorial service will be held at 10:00 A.M. Saturday December 2, 2017 at the church with Pastor Neal Hauser officiating. Burial will be held at a later date. Memorials may be made to Gary’s family.

The family of Gary Ferguson Sr. created this Life Tributes page to make it easy to share your memories.

Send flowers to the Ferguson family.