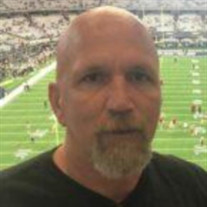 Frank Brookwalter, 55, of Amarillo, TX passed away peacefully in his sleep Wednesday, August 5, 2020. A Gathering of Friends and Family will be held from 5-7pm, on Friday, August 21, 2020, at Anderson Funeral Home in Hoopeston, IL. Burial will be held at a later date. Frank was born April 29, 1965, to Martin and Joyce “Ault” Brookwalter in Danville, IL. He graduated from Wellington, IL, where he enjoyed playing basketball with his older brother, Mike. Frank served a short time in the Army. He was a member of Encounter Church. He loved the Lord and he loved people. He didn’t know a stranger and was always willing to lend a helping hand. His favorite pastimes were going to church, spending time with his family, friends, and his beloved boxer, Sophie, and riding his Harley. He took a great effort keeping in constant contact with those he loved. He made many shotgun-runs to his many friends and family back home, especially his daughter, Brandy and Pat, his grandkids, Tom Lynn, and many special cousins, nieces, nephews, and his brother. He was preceded in death by his parents; and brothers, Michael, and Bryan Brookwalter. He is survived by his wife, Dana Brookwalter, of Amarillo, TX; daughter, Brandy Laffoon and husband Patrick, of Sheldon, IL; step-daughter, Brittany Bice and husband Cody, of Amarillo, TX; son, Cade Lindley, of Brownwood, TX; step-sons,Hunter, Weston, and Wyatt Young, all of Amarillo, TX; two grandchildren, Hunter and Danielle Laffoon, both of Sheldon, IL; step-grandchildren, Brylee and Braelynn Bice, both of Amarillo, TX; and a brother, Tom Bookwalter, of Hoopeston, IL.

Frank Brookwalter, 55, of Amarillo, TX passed away peacefully in his sleep Wednesday, August 5, 2020. A Gathering of Friends and Family will be held from 5-7pm, on Friday, August 21, 2020, at Anderson Funeral Home in Hoopeston, IL. Burial will... View Obituary & Service Information

The family of Frank Brookwalter created this Life Tributes page to make it easy to share your memories.

Send flowers to the Brookwalter family.