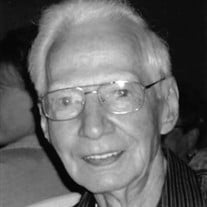 Francis “Hup” Johnson, 88, of Hoopeston, formerly of Danville, IL, passed peacefully on Tuesday, March 12, 2019 at Heritage Health Therapy and Senior Living in Hoopeston. He was born April 4, 1930, in Hope, IL, to Harry and Hulie Johnson. He married Fern McElwain on November 16, 1953. She preceded him in death on December 15, 2017, after sixty-four years of marriage. Hup was loved and will be mourned by daughters, Debra (Dennis) Coakley of Saint Joseph, IL and Susan (Bob) Goodrum of Hoopeston, IL; six grandchildren, Jaime (Louis), Brett (Michelle), Brian (Jessica), Ashley (Jake), Ryan (Lindsay), and Clay; three step-grandchildren, Aaron (Amanda), Michelle (Ryan), and Bryton (Melanie); four great-grandchildren; and five step-great-grandchildren. He is also survived by a brother, Claudie Johnson of Williamsport, IN. Francis was preceded in death by his parents; three brothers; and three sisters. Hup retired from Shur-Gain Feeds in 1995 after 42 years of service. His nickname was given to him based on the fact that he was born in a Hup-mobile on a country road near Hope, IL. He loved country music and was well known for sounding like Ernest Tubb. The daughters of Hup would like to thank everyone at Heritage Health of Hoopeston for all the care and support which was shown to our family. A private family service will be held. Memorials may be made to Heritage Health Therapy and Senior Living 423 N. Dixie Highway, Hoopeston, IL 60942.

The family of Francis "Hup" Johnson created this Life Tributes page to make it easy to share your memories.