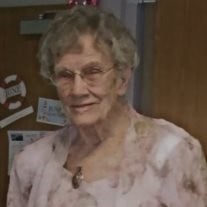 Frances Ruth White, 98, of Hoopeston, IL, formerly of Bismarck, IL, passed away at 9:00 P.M. Saturday January 18, 2014, at Heritage Manor Rehabilitation & Senior Living in Hoopeston. She was born December 1, 1915, in Danville, IL, the daughter of John H. and Ruth (Spandeau) McCormick. She married John R. White in February 1938. He preceded her in death. She is survived by two daughters, Mary F. (Louis) White of Tahlequah, OK and Ruth (James) Siddens of Mitchell, IN; two sons, Charles B. (Eleanor) White of Bismarck, IL and Steven A. (Andy) White of Danville, IL; daughter-in-law, Gwen White of Austin, TX; 15 grandchildren; 11 great-grandchildren and several nieces and nephews. She was preceded in death by her parents and one son John M. White. Mrs. White was a school teacher, beginning her career in 1935 and retiring in 1982, after 47 years. She loved teaching, even after her retirement. She was a member of the Northside Church of Christ in Bismarck, IL. Frances enjoyed reading, attending Bible study, traveling and canning. She also enjoyed writing poetry, winning the Tahlequah, Oklahoma Library Award in the Public Library competition. On her 90th birthday, Frances celebrated by taking a hot air balloon ride. Memorials may be made to the Austin Graduate School of Theology 7640 Guadalupe St. Austin, Texas 78752.

The family of Frances Ruth White created this Life Tributes page to make it easy to share your memories.